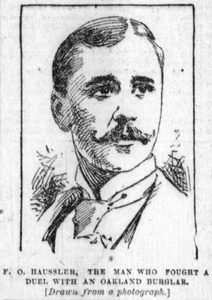 Frederick (F.O.) Haussler ran a photo studio at 911 Broadway (then between 8th and 9th St.) beginning in 1892, after buying out William W. Dames. 3,10 Haussler had previously had studios in Mexico City and San Jose. 8 In 1897, Haussler opened another studio in San Francisco. 7

The Oakland building is still there; Beast Mode Apparel is in the downstairs. 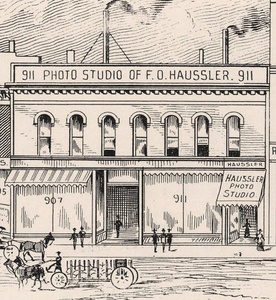 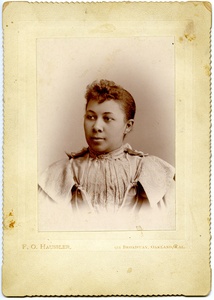 Haussler came to the U.S. in 1888 from Germany. He married Clara B. McCabe, and they had 3 children: Walter F. Haussler, Dana Otto Haussler, and Miriam Haussler. The family moved a fair amount, but Dana was born in Oakland in 1895. After living for a time in San Francisco, they eventually moved to Los Angeles.

In February 1895, Haussler fought a gun battle with a burglar. Early in the morning of February 9th, Clara Haussler heard a burglar in the backyard, breaking into the tool shed. She and a woman who was staying with her managed to scare him off. Haussler returned a bit later from visiting a sick friend, and the burglar was back. After an exchange of words, the burglar shot at Haussler missing him by "5 or 6 inches," and Haussler replied with 3 shots. The burglar fired another shot and fled. 11

The next month, Haussler was arrested for battery following the resignation of his assistant, Miss Laura Watters of Fruit Vale. Watters had been working for Haussler for 9 or 10 months, and decided to seek new employment. She said "I have worked hard for Mr. Haussler, and he has not seemed to appreciate it. He has been curt and gruff and discourteous to me at all times and he has treated many of his patrons in the same manner." 5 Words were exchanged, and Watters left but returned the next day to receive the pay she was owed. After leaving, she returned a few minutes later to retrieve a package containing some her work. Inquiring about it, Haussler said he had burned it. More words were exchanged, and Haussler pushed Watters down the first flight of steps into a wall. When questioned by a Tribune reporter, Haussler said that "he had simply 'assisted' Miss Watters out of his studio." 5 Despite what seems to be largely supporting or at least not conflicting testimony from witnesses, Haussler was found not guilty. 6

After moving to San Francisco, Haussler was in the news in May 1898 for a fight with some of his sub-tenants over rent. He had sublet part of his gallery to 3 men, but grew tired of them and ordered them to vacate. Things escalated, and a fight ensued. He was charged with assault with a deadly weapon (a hatchet) and his wife, Clara B. Haussler, was charged with battery. 12,16 A few months later in August, he was in the news again, this time accusing a former employee, Charles Meyer, of theft. 13

Then in 1907, Haussler had a dust up with J.T. McKean, a photographer in Santa Cruz that he was working for. After a night of heavy drinking, Haussler left the water running. McKean reprimanded him the next morning, and a fight ensued. McKean ended up with a gash in his head and a dislocated shoulder, and Haussler ended up in jail. The Santa Cruz Evening Sentinel wasn't too kind to Haussler: "Haussler is one of those restless individuals who are never content to stop in any locality more than a couple of moons, and he is also cursed by an unquenchable thirst for liquor." 14

Haussler's name came into the news in unusual circumstances in 1915. Miss Mabel Coxe, daughter of General Frank M. Coxe, was found wandering about SF in a daze. After recovering a bit, she claimed she had been drugged and maltreated while at Haussler's SF photo studio, where she had gone to be photographed. She exonerated Haussler of all blame, but said an unknown young man was to blame. 9 Some months later, Mabel Coxe was found in a ravine near Auburn, CA, and was committed to the State Hospital at Napa for inebriety. This might be otherwise uninteresting with regards to Oakland, but General Frank M. Coxe was the namesake of steam ferry built for the US Army in c.1922. Much later in its history, the ship became second home of the Showboat Restaurant in Jack London Square.