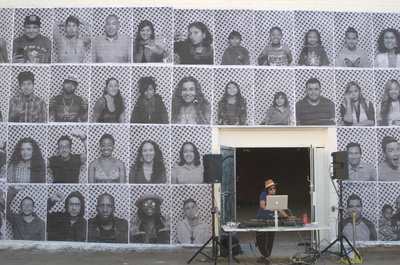 Face to Face
photo CC-A from Our Oakland
On July 25th, 2013 Favianna Rodriguez and the CultureStrike Team, along Ted Prize winner JR of the Inside Out project (the dude who makes those oversize black and white portraits in public spaces) put together a mobile photo studio and installed large-scale b&w portraits at 2323 Broadway, the HUB Oakland popup space.

The photos were printed and put on the wall. In their words:

Face to Face: Action. Healing. Solidarity. is about showing the faces of migrant folks and allies. We also want to connect the experiences of immigrant and Black communities and the ongoing criminalization they face due to unjust laws and negative portrayals in the media. This project will travel to over 20 cities and Oakland is among the first stops.

Some of the pictures were tagged over and a mural was painted on the bottom by ...