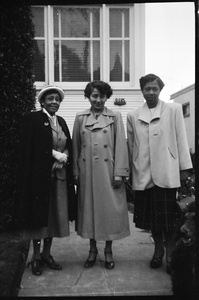 Faricita on the right 1930 E. F. Joseph Photograph CollectionFaricita Hall Wyatt
(October 29, 1912 - 1993) was an artist, educator and poet who taught for many years at Skyline High School in Oakland, California.

The daughter of William M. Hall and Susie Sylindia Pinkney Hall.  Hall Wyatt graduated from San Jose State College in 1935 with a A. B. degree.

During WWII Hall Wyatt joined the Women's Army Corp and from 1943 to 1946 served as a Company Commander.

After WWII Hall Wyatt held the position of employment officer for the State of California until 1959, when she was hired as Congressman Jeffrey Cohelan's secretary.

In 1962 Hall Wyatt earned her teaching credential from the University of California, Berkeley, and went on to teach at Skyline High School in the areas of creative writing, history and literature until she retired in 1975.

Hall Wyatt was an accomplished painter, and two of her books of poetry were published The River Must Flow in 1965, and By the Banks of the River in 1974.

Tracing the Range of Interest and Activities Development (TRIAD) was a software package created and published by Hall Wyatt to assist job seekers in matching their skills with any potential employers.

Faricita Hall Wyatt was active in many clubs and other civic organizations throughout he life.