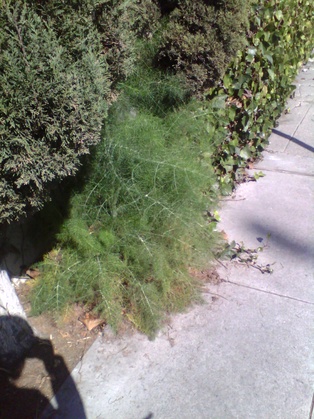 Sidewalk fennel in Longfellow. (mk30)Fennel is an herb that grows wild in many parts of Oakland. It appears to favor sidewalk cracks near abandoned fences, overgrown parking lots, freeway medians, etc. If you're not sure whether you're looking at fennel, you can always take a little piece off the top and try it. It should taste a little bit like liquorice. Fennel in Oakland often grows up to 3 feet tall and if you walk in particularly fennel-rich areas (like 7th St. directly east of West Oakland BART station), the air will even smell like fennel. As with many herbs, you will probably have better luck with the highest parts of the plant - all the best to avoid eating wild food that has been watered by dogs!

Fennel looks like this and can be made in recipes like these. The fennel you will most likely be gathering from the streets of Oakland will be the upper herby part and you can use it to season dishes, etc. The fennel bulb is also used in many recipes that call for fennel, but unless you start digging fennel up out of the ground (which wouldn't leave a whole lot of fennel for other Oaklanders, although it's not like we're running out!), you will probably be limited to using the leafy part of fennel in your delicious recipes.

Trivia: There is a particular species of butterfly whose pupae eat fennel. This is their primary food source.

More Trivia: Fennel is not native to the Bay Area or even to the US. It was brought to the US from Italy.

Not everyone likes the flavor of fennel as an herb. This editor's opinion is that the fennel herb has particular affinity with meaty foods. The bulb is much milder and delicious in salads. The restaurant Gather (Berkeley) often has really nice vegetarian dishes that incorporate fennel bulb. - mk30

As a spice, fennel seeds are frequently offered after meals in Bangladeshi, Indian and Pakistani cuisine and make a great breath freshener. ~diwu118

Good spots: my yard. As a person who doesn't like fennel as an herb (see above) I would like to note that fennel is considered by many gardeners to be a WEED, which is the negative term for "wild plant." It grows like mad, spread likes mad, and has really hard to pull out roots, also referred to above as the "bulb." If anyone is interested in fennel for their personal consumption, please contact this editor directly. -greenkozi