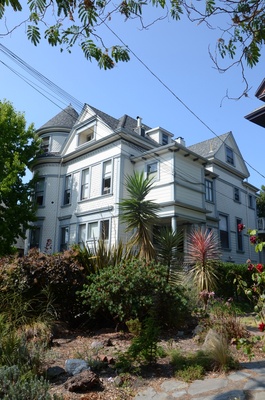 The Fenton Home Orphanage was an orphanage in Oakland from 1925 to at least 1938. It was also known as the Susan Fenton Home for Destitute Children. Most of the time it was at 1047 Bella Vista Avenue.

The home opened in May, 1925, at 886 Cleveland Street; 8 some time prior to 1928 it moved to Bella Vista. The orphanage became a clearing house where children were first sent when taken from "broken homes or juvenile court". 3

Dr. Susan Fenton was an early woman doctor in Oakland. In addition to the home she helped found, a wing at Fabiola Hospital was named for her. Dr. Fenton was the sister of Elbridge Seth Fenton, founder of Fenton's Creamery. 6

According to a former resident, the first floor was dining, the second floor was boys, and the third floor was girls.

The house, which originally had an address of 33 Bella Vista Avenue, was built for Mignonette and Austin Hills (of Hills Brothers Coffee fame) in 1892. It was designed by Walter J. Mathews. 1