Fire. One of the classical aristototalitarian elements. Here in Oak Land, we know how to have a good fire in a driveway or a backyard or a parking lot or whatever kind of thing. Maybe a dumbster. I saw one of those on fire this one time on Broadway during some civil unrest. 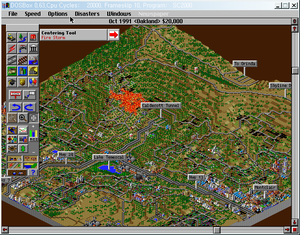 One of the SimCity 2000 scenarios is about it and you can play as the mayor of Oakland and everything. You can go up to top of that highway. I think it's 23? There is a bike lane in the middle of it which is weird. Anyways there are a bunch of placards where you can learn about how the fires pretty much were really huge and burned a bunch of trees and houses.

Enemies of fire in Oakland: