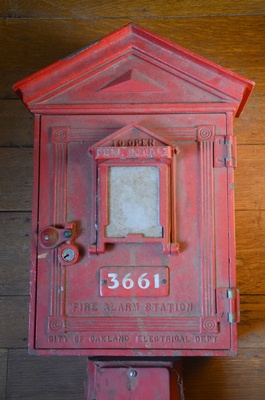 #3661 was at 55th Ave. and Princeton
CC SA-BY Our OaklandFire Alarm Boxes…where are they now? In the old days of close-built wooden houses, lit by whale oil or gas jets, the threat of fire was constant and very great. Thus, both the fire and police departments had alarm boxes. The former were colored red (San Francisco still uses its boxes), the latter blue. Both operated similarly, via telegraphy, before the public phone system was thought sufficiently reliable to entrust with life-and-death matters. A citizen broke the glass cover and pulled a little hook, which telegraphed the box location to the authorities.

Mathew de la Montanya, an early Fire Chief, ordered the installation of OFD’s fire boxes. 1 The installation apparently began c. the 1880s. At the time, few people had telephones, and fires were mainly reported by children or neighbors who ran to the firehouse. The new system was seen as a great step forward in safety and security for all. The alarm transmitter consisted of copper wire mounted in a glass case with a nickel frame, which received calls from public alarm boxes and relayed them via telegraph lines to the nearest fire station. This informed the station manager exactly which alarm box had been rung — but provided no information on the nature of the emergency.

OAKLAND, July 17— Miss Mae Perkins, society belle and a daughter of U.S. Senator George C. Perkins, played heroine this afternoon at a fire which destroyed the residence of Captain R. Greig, 371 Orange street, opposite Palm Knoll, the beautiful Vernon Heights home of the Perkins family. Shortly after noon Miss Perkins, from her home, noticed fire in a corner of the Greig residence. Without waiting to summon help the young woman procured a fire-alarm-box key, ran to the box across the street and turned in an alarm. Then she hastened to the burning building and headed a volunteer fire brigade that was assembled from among the neighbors …

The Oakl​and Fire and Police Call Boxes website says the first mention of fire alarm boxes in Oakland was in 1871, and ”in 1873 the City purchased from Capt F.B. Tarbett: 5 Morse Registers, 5 Relays, 2 miles of Telegraph wire and several small cups of gravity batteries for $800.” Each box had a number assigned to it represented by a number of ‘dits’; there was no 1, 10 or 11. Numbers 12 and up were encoded as a dit, a pause, then two dits. 2

The first fire boxes were located at: 2

After the new Fire Alarm Building near Lake Merritt was constructed in 1911, the alarms would ring there for dispatch.

Apocryphal … or real? (Probably had to happen sooner or later …)

OAKLAND, June 26.—Believing that he was pulling the lever of a letter box at the corner of Sixteenth street and San Pablo avenue, an aged blind man pulled vigorously on the lever of fire alarm box 56 this afternoon, turning in an alarm and bringing the Fire Department to the corner in short time. During the excitement the man disappeared in the crowd muttering complaints against letter boxes that had no openings for the mails.