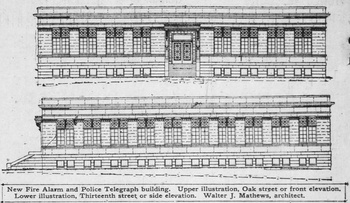 The Fire Alarm Building is a stout building at 1310 Oak Street, completed in 1911 to house the alarm system for the Oakland Fire Department and Oakland Police Department. It was used until a new dispatch center was built at Station 1 in 1983.

As of October 2019, the Oakland city council is looking to dispose of the building, possibly leasing the building to the Museum of Jazz & Art. 5

According to Oakland Fire Department by Geoffrey Hunter, it was built at the suggestion of Mayor Frank Mott, following the destruction of much of OFD's alarm system in the 1906 earthquake. It was designed by noted architect Walter J. Mathews 3, and is built of fireproof materials. The building is also placed on a small, separate block by itself. 1 It's not far from the Municipal Boathouse, the center portion of which was built in 1909 as an emergency OFD pumping station, another response following the 1906 earthquake. 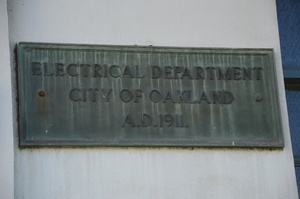 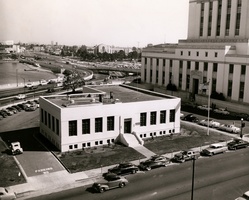 This 2011 slideshow includes photos from the interior; much of the original equipment is intact.