The Firestone Tire & Rubber Building on the southeast corner of Broadway and 30th Street on Broadway Auto Row was built in 1930. The building is rated as having major historical significance (according to the Oakland Cultural Heritage Survey) and also qualifies as a historic resource for purposes of the California Environmental Quality Act ("CEQA").  The Broadway/Valdez District Specific Plan Existing Conditions Report described the building as follows in 2009: 1 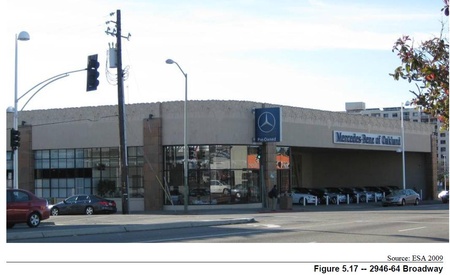 Source: Broadway/Valdez District Specific Plan Existing Conditions Report (2009) 1The Firestone Tire & Rubber service station at 2946-64 Broadway is a one story Art Deco service garage in the Upper Broadway Auto Row District. The building has a trapezoidal plan on a corner lot, and has a truss roof, decorated parapet and rounded corner with recessed entry. The exterior walls are cast concrete and terra cotta, and the decorative parapet has a cast concrete leaf pattern with crests marked “F” (Firestone) spaced evenly throughout. The building was constructed in 1930 by builder Harold Page and designed by architect Charles W. McCall. The original owner and occupant from the 1930s was Firestone Tire and Rubber. The building reflects motor transportation and the auto industry, as well as national business and industries in Oakland. The building is currently used as an auto showroom. The Firestone Tire and Rubber service station is a “B” rated building within the Project Area. Based on the pedestrian survey completed by ESA in March 2009, this building would retain its existing rating.

When this report was drafted, the building was being used as a showroom for the Mercedes Benz dealership across the street. As of December 26, 2014, the building is now in the process of being converted into a CVS store. 2 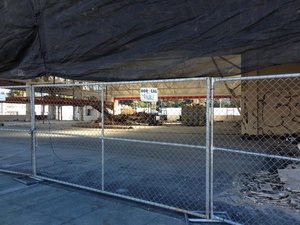