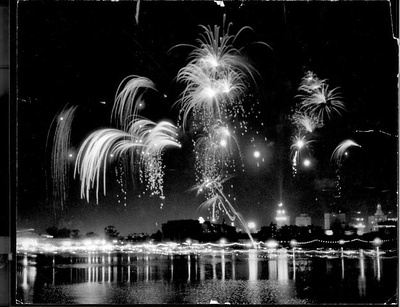 Fireworks have been a part of celebrations in Oakland for over 100 years. 3 Displays are most often around the Fourth of July, but they are sometimes at New Year's Eve or sporting events. 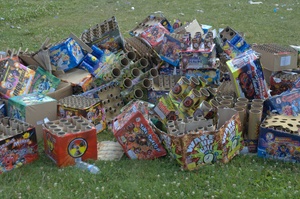 CC SA-BY Our OaklandSome Oaklanders set off fireworks and other firecrackers on their own in smaller, illegal displays, which are sometimes confused with gunfire.

Of more interest are the larger, official displays over the years:

While many people enjoy the lights and sounds of a fireworks display, they can be highly stressful for those who suffer from Post-Traumatic Stress Disorder (PTSD). They are also stressful for many animals, both pets, and wild animals such as birds.

Fireworks are also a source of pollution. They blast particulate into the air, which may include heavy metals and other toxic materials. However, the EPA has said that it would require repeated exposure to be a significant risk. 2

And of course, they're dangerous—they're explosives. According to a Consumer Product Safety Commission (CPSC) report, in 2014 in the U.S., eleven people died in "nonoccupational fireworks-related deaths" and there were an estimated 10,500 injuries treated at hospital emergency rooms. 7

Except for permitted professional displays, all fireworks are illegal in Oakland, including so-called "safe and sane" fireworks 8. Each year around the Fourth of July, the Oakland Fire Department has no-questions-asked drop-offs at some of the fire stations. 6 While the city ordinance was most recently updated in 2004, fireworks were banned as far back as 1911. 9,10