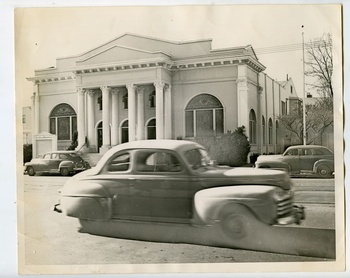 First African Methodist Episcopal (FAME) Church is the oldest black church in Oakland, founded in 1858 as Shiloh AME. It was also known as Fifteenth Street Church for a time. The founders included Isaac and Elizabeth Flood, who also helped desegregate schools in Oakland. 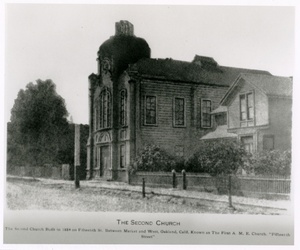 The church was started in 1858 by a small group of residents. In 1863, they purchased the former schoolhouse which had been constructed by Horace Carpentier.

In 1874, Jeremiah Sanderson was appointed the first minister of First A.M.E. Previously services had been led by a mix of laypeople and local pastors. Sadly, Sanderson was struck by a train and killed on his way home from a prayer meeting in 1875. 4,5

Ten years later in 1884 under the leadership of Rev. James Grigsby, the church moved to a larger location on 15th St. between Market and West. and became known as Fifteenth Street Church.

Rev. H. Solomon Hill became minister in 1949. Under his leadership, the church moved to its present location at 37th and Telegraph in 1954, and became First African Methodist Episcopal Church. 3 The building had formerly housed the Pioneer Memorial Methodist Church, and was constructed in 1917.