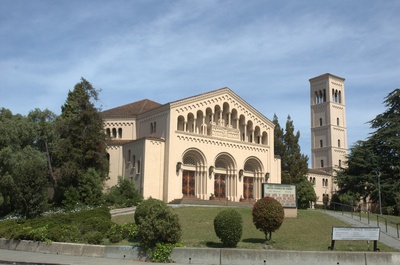 First Congregational Church is a historic church at 2501 Harrison Street. The congregation dates back to 1860, starting with a group that had been meeting at the home of F. K. Shattuck. The current building dates back to 1925 and was designed by architect John Galen Howard, and contains stained glass windows designed by Willelmina Ogterop. The church is a United Church of Christ and has been affectionately called "First Church" and "First Congo". 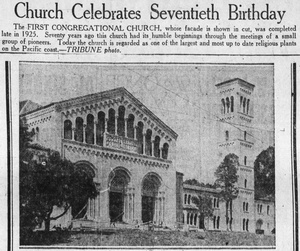 1930 article 3 NB: pic might be 1925First Congregational Church of Oakland began in 1860, when seventeen people met in the still unincorporated little city of Oakland at the home of Mr. Shattuck and formed what became Oakland's First Church.

Frank "Borax" Smith and his wife Mary were members of First Congregational Church. When Mary Smith started the Home for Friendless Girls in 1901, the trust was governed by a board of trustees of women from the congregation. The present church building has a "Francis Marion Smith / Evelyn Ellis Smith Memorial Room" that is used as a library and meeting room.

In 1909, the church was at 12th and Clay, and Charles R. Brown was pastor. Astronomer Charles Burckhalter spoke at the church about Halley's Comet. 2

The First Congregational Church of Oakland has been active in supporting education, the arts, and social justice since the early days of this city, including playing a vital role in founding the University of California and the Pacific School of Religion seminary. Through active ministry in and to the growing city of Oakland, the church outgrew both its first and its second buildings. In 1923 and after a decade of discernment, the church sold its home on 12th and Clay, and bought the land at 27th and Harrison Streets. 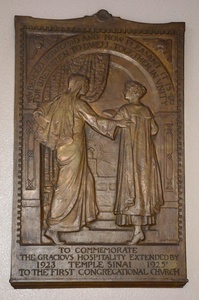 plaque thanking Temple Sinai
photo CC-A from Our OaklandFrom 1923 to 1925, the church's Sunday school was held at the First Unitarian Church while the congregation met at Temple Sinai, whose congregation generously allowed the church to use the building for worship for over two years without charge.

in 1862, FCCO began cooking and serving daily hot meals to the many migratory workers in and around downtown Oakland. Today, we partner with Food Not Bombs, ShareFirst Oakland, and the UCC Eucharist Ministry Food of God for People of God collectively bringing meals to over 1200 people a month.

In 1957, the First Congregational Church of Oakland joined the movement to form the United Church of Christ (UCC), a "united and uniting" church, working for global peace, justice and unity.

In December 2010, after several months of discernment and discussion, the members of FCCO gathered and made the decision to become a lay-led congregation.

Members of the church have included: