from A Steeple Among the Oaks 3 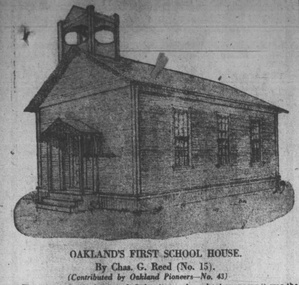 The First Schoolhouse in Oakland was at 4th and Clay, and was owned by Horace Carpentier. Oakland's first schoolteacher was Hannah Jayne, who later married Edson Adams, one of Carpentier's partners.

In 1852, only 5 days after Oakland’s first incorporation, Alfred Burrell introduced an ordinance that would grant Carpentier the entire waterfront in exchange for the schoolhouse and a wharf. The building was constructed in 1853 at the cost of $1,000. 1 It was formally turned over to the city on July 12, 1853. 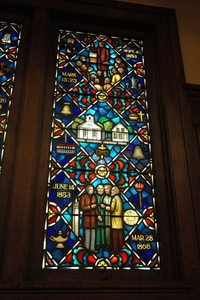 CC SA-BY Our OaklandIn 1853, the First Presbyterian Church used the building for services. The current sanctuary of the church (built in 1914) memorializes the schoolhouse in one of its stained glass windows showing church history.

Some sources say that from 1862 to 1864, the First Methodist Church used the building for services. In 1864, they moved the building to 6th and Washington and remodeled it into a church. 2

Other sources say the First African Methodist Episcopal Church purchased the building in 1863 4 and used it for services after moving it to 7th and West Streets. 6

According to someone who attended the school as a child:

"The building stood at the northeast corner of Fourth and Clay streets, facing south. ... It was 22x38 feet, twelve foot ceiling, shingled roof and clapboarded sides. The belfry contained a small bell which, owing to the prevailing stillness of the little hamlet, could be hard at my home near 16th and Market streets a mile away. The building was painted white. ... A small covered porch about 4x5 feet stood over the front door.

The building was not plastered, but sealed on sides and ceiling with boards and painted light blue. The ceiling was bespattered with spit-balls made by chewing paper and while the cud was wet and the teacher's back turned, throwing them with such force that they adhered.

On the west side of the teacher's desk was a small wood stove with a pipe running through the back wall, and on the back wall a blackboard." 5