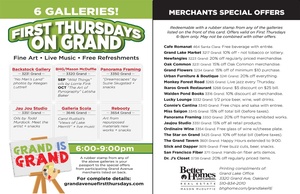 Front and back of First Thursdays on Grand Postcard

This event originally was called the First Thursday Art Walk by the Piedmont Patch. Panorama Framing (3350 Grand) and ReBooty (3654 Grand) each independently began hosting events on the first Thursday of each month, with Panorama's being in April of 2013. Shortly after that, Ken Katz became a catalyst for the growth of the event and ReBooty, Panorama and others began offering their openings along with other merchants' special offerings each "First Thursday" of the month.

By the second month however, June 2103, a new name incorporating "Grand Avenue" in its title became official along with their then new website (hosted and maintained by Patrick of Panorama Framing, at no charge to anyone):

Every First Thursday of the Month, 6:00 - 9:00 p.m., Grand Avenue from Lake Park to the Piedmont border. The Grand Avenue Business District hosts a monthly art event with special discounts from merchants and galleries.

For the September 2013 First Thursday, the number of Art Galleries participating doubled from three to six.

Get your hand stamped at any of the six galleries above and receive: