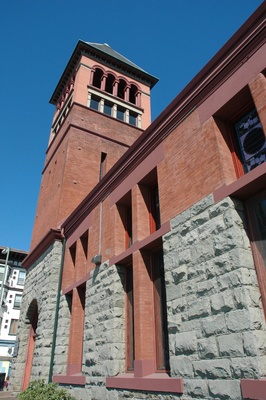 First Unitarian Church of Oakland
photo from Our Oakland

The First Unitarian Church of Oakland is a large, brick, Romanesque church at 685 14th Street in downtown Oakland. it was designed in 1889 by local architect Walter J. Mathews under the direction of the Rev. Charles W. Wendte, and built in 1890-91 by contractor Peter Remillard. The church building is still in use today.

The land was purchased from Jane Sather of UC Berkeley's Sather Gate) who was a member of the church. When built, the church was just a few blocks west of downtown Oakland in a well-to-do residential neighborhood. During construction of the church and for at least a few years afterwards, the minister lived in a house on the opposite side of 14th Street.

Over the years, the neighborhood changed dramatically. The Oakland Public Library known as the Charles S. Green Library (now the AAMLO) was built next door in 1904. By 1910, when an apartment building was built across the street at the northeast corner of 14th and Castro Streets, the original neighborhood of single family houses was changing into a working class neighborhood of subdivided houses and apartments. By 1951, there was a police garage and fire station on Grove Street (now Martin Luther King, Jr. Way) a block away. In the 1960s, the route of the Grove-Shafter freeway was established west of the church across Castro Street. Many buildings in the neighborhood were demolished.

On August 5, 1975 the First Unitarian Church was designated Oakland Landmark #13, under Zoning Case #LM 75-221. The building is also California Historical Landmark #896, and listed on the National Register of Historic Places as NPS-77000284.

The church has survived major damage from the 1906 Earthquake, urban renewal in the 1950s and 1960s, and the 1989 Loma Prieta earthquake, although it required extensive work after the 1989 quake. 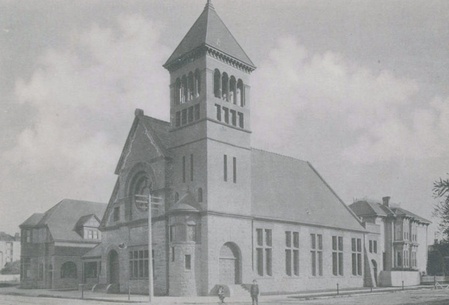 An 1874 directory of Oakland lists it as Independent Presbyterian with Rev. L. Hamilton as pastor, and Rev. Henry Durant and Rev. David McClure as officers.

Swami Vivekananda spoke at the church on February 25, 1900, while on a visit to Northern California. Members and followers the Vedanta Society regard Hamilton Hall as a shrine. 2 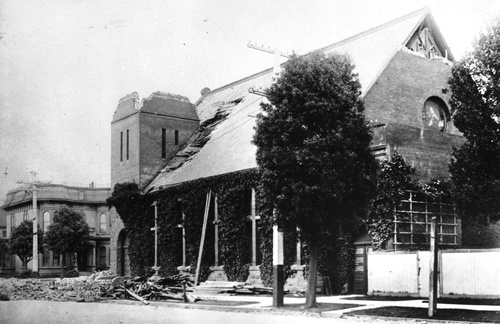 Members of the congregation have included: 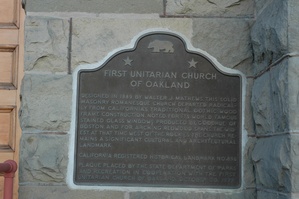