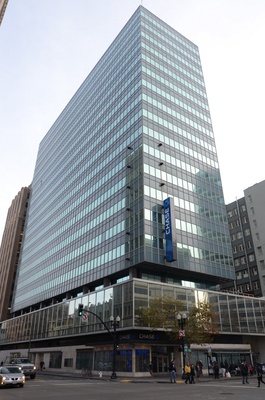 Built in 1956-1959, this 18 story, T-plan steel frame International style office tower faced with blue gray aluminum panels ("skyzure blue") and blut tinted glass in bright aluminum mullions.  The upper stories float above a projecting glass walled second story (originally a bank), which in turn floats above a retail ground floor.  Both "floating" effects are the result of recessed intermediate sections.  The stem of the T faces south, with a 21 story elevator tower and a 9 story garage wing fronting on 13th Street, all faced in a bluish gray concrete aggregate.  Escalators lead from a large lobby on Broadway and a secondary entrance on 14th Street to the second floor former banking hall.  The interior marble and terrazzo walls and floors and black granite columns are partially intact.

The architectural firm, Stone, Mulloy, Marraccini and Patterson or SMMP, was a major designer of hospitals and other large projects.  The building is a direct reflection of the landmark Lever House in New York City (built by Skidmore, Owings & Merrill: 1952), and one of the earliest examples of the International style in the Bay Area.  As such it may become individually eligible for the National Register and a district contributor when 50 years old.  It occupies the site of the 1892 MacDonough Theater, and continues the pattern of well spaced corner skyscrapers, compatible with the district in use, scale, and siting.

This historic building is #6 on the list of District Contributors/Noncontributor for the Downtown Oakland Historic District Registration Form. The First Western Building & Garage is a non-contributor. 1