"Flagg-built" appears in many real estate listings for homes around the East Bay.

A. J. and John were born in Nebraska to Everett S. Flagg and Charity M. Smith (Flagg), who ran a farm. They also had a daughter, Susie Flagg (Grove). Charity's obituary mentions another (step?) son, Fred M. Patterson. Everett died sometime before 1920, and Charity got remarried, to Ira Johnston. 1

John married Ruth (Flagg) and they had one son, John S. Flagg, Jr. John and Ruth divorced in 1926,5,6 and John got remarried to Florence M. Moon (Flagg). They had 2 children: Marvin Flagg and Shirley Flagg. 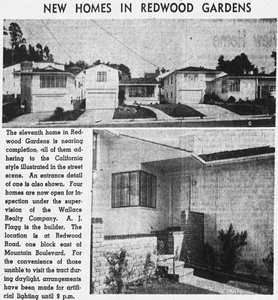 After coming to Oakland c.1922, the Flaggs worked as contractors and developers, building numerous homes around Oakland. "Flagg-built" appears in many sale listings over the years.

In 1929, they also built the Alhambra Apartments, a larger apartment building near Fruitvale Avenue.

Beginning in 1939, A. J. Flagg built 29 homes in the Redwood Gardens development, on Detroit Avenue off Redwood Road. 3

In 1949, the Flaggs purchased Pland's Restaurant. Apparently they were very successful with the restaurant, and in 1951, purchased Klee's Smorgasbord in Montclair Village. After extensive remodeling, they opened it as Flagg's Restaurant.

They didn't own Flagg's very long, selling it to Sanford Cohn in 1953. By 1957, the Flaggs had moved to Reno, Nevada, probably to be near their Tahoe real estate holdings. 2