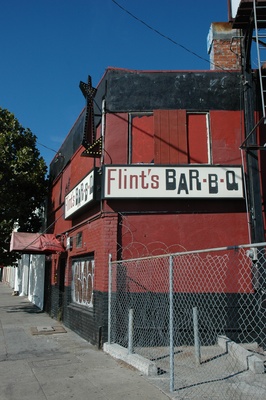 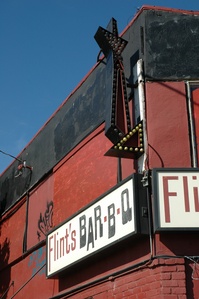 Flint's Bar-B-Q was a local barbecue restaurant chain that started in 1968, with at least three branches in Oakland. The last closed in 2010.

The restaurant was started by Willie Flintroy in 1968 at Havenscourt and E. 14th Streets. Willie passed away in 1972, but his brothers Freeman and Neil kept the business going.

Flint's was always a no-frills affair. The Shattuck location was take-out only, and not a very impressive store front. But people would line up to get it. Part of the love for Flint's was its sauce. Customers would ask for it to be poured on the potato salad, and mop up the last drops with the slices of white bread that came with every order. There have even been attempts to reverse-engineer the recipe, but with mixed success. 2

Everett & Jones Barbeque founder Dorothy Everett worked at the first Flint's, first tending a smoke pit, and later as the first manager of the store. 1