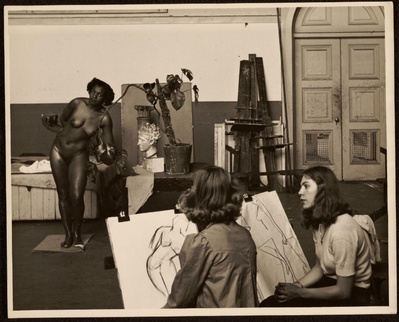 modeling at California School of Fine Arts, 1948 (fair use) 1

She became involved in civil rights activism, and also worked as a newspaper columnist, socializing with the likes of Paul Robeson, Paul Newman, Harry Belafonte, and Allen Ginsberg. When not modeling, she worked at the Washington Square Bar and Grill in North Beach, the Old Spaghetti Factory on Green Street, and the Savoy Tivoli on Grant Avenue. 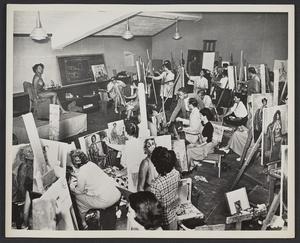 She started modeling in 1933 because she needed money. Allen modeled nude at the 1939 World’s Fair, in the Candid Camera exhibition. Attendees would enter the exhibition, and a curtain would open with a nude Allen on display for visitors to photograph. Photographs from this exhibition are rare, and were considered “highly provocative,” for the time period.

She modeled for Mark Rothko, Diego Rivera, Gertrude Murphy, Wayne Thiebaud, Ralph Du Casse, and many other artists. She modeled for art classes at the San Francisco Art Institute; University of California, Berkeley; Stanford; the California College of Arts and Crafts, and Mills College. She was primarily a nude model. She was paid more, making 75 cents an hour instead of 50 cents an hour for clothed modeling. She founded the San Francisco Models’ Guild in 1945, which is now called the Bay Area Models’ Guild.

In 1955, she donated her papers to the collection of the Archives of American Art.

In 1965, the University of California San Francisco held an exhibition about Allen titled “Florence Allen Herself”. That same year, photographs of Allen were exhibited at the UC Medical Center Millberry Union. Two additional retrospectives were held in the area during that decade.

Starting in 1987, she served as the Model Coordinator and a teacher of modeling at the California College of Arts and Crafts. She preferred her students to model nude, like her, and disliked working with fashion models.

That year, while crossing a street near Fisherman’s Wharf, she was hit by a truck and became disabled.

She died in 1997 at her sister’s house in El Sobrante. She was cremated, and her ashes were scattered at sea. A memorial was later held in her honor at the California College of Arts and Crafts carriage house, and a plaque installed there, where she had modeled.