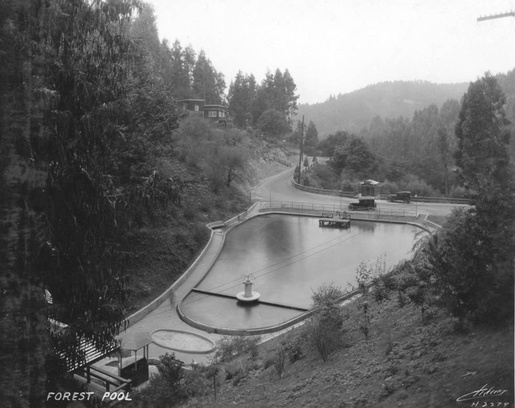 Article from 4-28-34 Oakland TribuneForest Pool was located at Thornhill Drive and Woodhaven Way in the Oakland Hills and might have been part of a Wickham Havens, Inc. real estate subdivision.  It is now part of the Montclair Swim Club.

In 1927 "The Forest Pool" was constructed to entice people to buy hillside lots on which to build residential homes in what is now known as the Montclair hills.  Fed by the surrounding hillside streams, the water in the pool was extremely cold.

Following the departure of various absentee landlords The Forest Pool became a public pool in the 1930's and 1940's.

In 1960 the facility changed from a public pool to a private club, the Montclair Swim Club, and underwent major upgrades.

When Jim Scalise took over ownership of the club in 1988 the facility was transformed from just a swimming pool to include a health club for families in the quiet residential neighborhood.