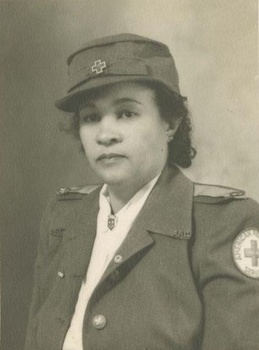 Frances Mary Albrier (September 21, 1898 – August 21, 1987) was a civil rights activist and community leader, and the first black woman hired at the Kaiser shipyards during WWII. Although she lived in Berkeley, she was also active in Oakland. Richmond and San Francisco.

Although she was born in Mount Vernon, NY, her mother died when she was young, and she was raised by her paternal grandmother in Tuskegee, AL. 2 Her grandmother was born into slavery, and her grandfather was Blackfoot Indian. 2

She received a B.A. from Howard University, and after graduating from UC Berkeley, she trained to be a nurse, but found it difficult to get hired. She then became a nurse for the Black Cross, part of UNIA. 1

In 1960, she flew to Africa and covered the Nigerian independence celebrations for the California Voice. 4,6

She was business manager of the Women's Art and Industrial Club in 1965.

Albrier was featured in the Soul Corner feature of the Wee Pals comic strip by Morrie Turner. 7 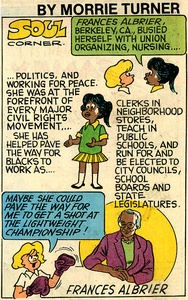