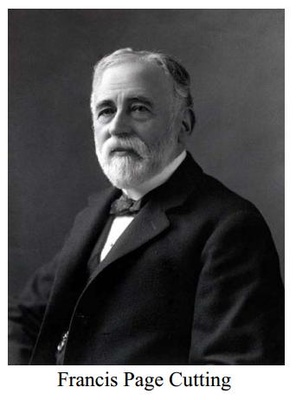 Francis Page Cutting (August 22, 1834 – October 1, 1913) was "one of the most influential figures in the state’s financial history" (from the Oakland Tribune obituary of 10/1/1913). He was the first large industrial fruit and vegetable canner in California, the first California packer to use tin containers, and the first to export California grown and processed fruit to the East coast, Europe and the Far East, grandfather of what would become the Del Monte brand.

Cutting was a brilliant entrepreneur in the right place at the right time. But Earl Morse Wilbur said of Cutting, "He was not at heart primarily a moneymaker or a man of business. His deepest interest and his greatest enthusiasm was religion. He was a mystic, almost to the verge of pantheism... In personal character he was affectionate, kindly, thoughtful, patient, charitable, courteous." (from President’s Report 1913-1914, p3). 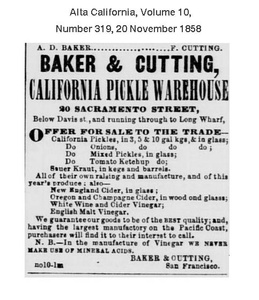 Although the first American canning factory was built in New York City in 1812, there was only one very small canning operation in California when Cutting arrived in 1858. In November of that year, Cutting purchased half interest in a vinegar company in San Francisco, which packed pickles for the miners as well as producing catsup and vinegar. Unhappy with the quality and cost of bottles brought from the East Coast, Cutting and his business partner Augustus D. Baker established a small glass making plant, Baker and Cutting in 1859. 2

Cutting returned to California in 1877. His wife did not. He lived briefly at the elegant Tubbs Hotel, a “center of society” in Oakland.

Cutting and his new wife, Sarah Abbie Cutler, built “one of the show places of the bay city” on her same large lot where they were living (he divorced his first wife, Frances Isabella Frost in April of 1896). The new house was listed at various times as 274 19th Street at Alice; 19th St. opposite Jackson; or Lakeside Terrace. The grounds went to the shore of Lake Merritt, the first wildlife refuge in the United States. The Cutting Mansion later became the home of the Snow Museum.

Cutting died in 1913 from diabetes. He had been ill for several months, and blind for the last few weeks. 1,3

After his death, his ashes were put in a single urn along with those of Sarah Abbie Cutting. The urn was buried in an unmarked grave in Mountain View Cemetery. There is a marker nearby for Sarah's first husband, Joseph R. Kendall.

Cutting left $100,000 to the Starr King School for Ministry. Sarah had wanted the school to be at the Cutting Mansion, but the school wanted to be closer to the University of California, Berkeley, and the other seminaries.