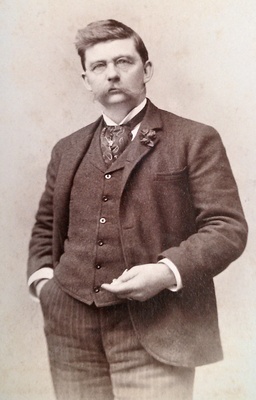 F.M. Smith
Courtesy the Oakland History Room of the Oakland Public LibraryFrancis Marion "Borax" Smith (February 2, 1846–August 27, 1931) was a businessman and civic leader. He made his fortune in borax mining, but also invested locally in real estate. He’s best known in Oakland for his contributions to civic infrastructure, creating the Realty Syndicate which developed many of Oakland’s neighborhoods, and for the Key System, a streetcar and ferry system which provided transportation in Oakland, Berkeley and Piedmont and across the bay to San Francisco. Less well known today were his efforts to consolidate a water company, first steps which eventually led to EBMUD.

Known as “Frank” to his friends, to the world he was known (to his eternal consternation) as “the Borax King” or simply, “Borax” Smith.

Smith was born February 2nd, 1846 in Richmond, Wisconsin, the fifth child of Henry G. and Charlotte (Paul) Smith. He attended Milton College in Wisconsin, then felt the call to go west. 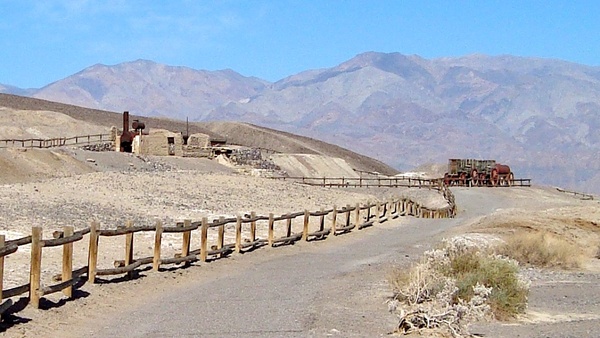 Site of the historic Harmony Borax Works mine (not Smith's mine) in Death Valley. (photo by mk30)Smith spent time mining in Idaho, Nevada and California. In 1872, while living in Nevada, he discovered a large borax deposit near Teel’s Marsh and started a borax company with his older brother Julius. Until then, the world’s known supply of borax had been relatively small, thus expensive (it sold for 35¢/lb). The Teel’s Marsh mine soon became the world’s largest source, and drove down the price to 3–4¢/lb, making it affordable for much wider commercial use, most notably as a cleanser. After expansions, he bought out his brother in 1884. He eventually made a fortune of approximately $25 million (equivalent to more than $600 million in 2011).

A borax processing plant Smith had built in 1889 in western Alameda was the first reinforced concrete structure built in the U.S.. Smith acquired a borax mine in Death Valley from William Tell Coleman in 1890. The famous 20 Mule Team Borax brand name (which was indeed based on a twenty mule team) was added in 1892. If you go to Death Valley National Park now, you can see the abandoned site of the Borax mine!

Real Estate and the Key System

Smith bought his first Oakland streetcar line in 1890. In 1895, he formed The Realty Syndicate with Frank C. Havens. Their primary goal was selling real estate; the streetcars were a way to get customers out to the neighborhoods to see and purchase it. By 1902, Smith had consolidated various streetcar lines to form the Key System. Many of Oakland’s urban paths and stairways were constructed during this period to connect various neighborhoods to the burgeoning Key System and further real-estate sales. Similarly, the Key Route Inn and the Claremont Hotel were built as resorts to encourage people to visit the area, and further the sales of real estate.

While the streetcars and the Key Route Inn are gone, the Claremont Hotel and the Realty Syndicate building (1440 Broadway, constructed 1903) are still extant as of 2014.

In 1875, Smith married Mary R. Wright (nee Thompson), and for the first 5 years lived in Nevada near the borax operations. In 1881, they moved to Oakland, near East 17th Street. In 1882, Smith began purchasing the Tubbs and Mathews ranches, land that would later become Arbor Villa. Frank and Mary moved into the nearby “old red house” (now at 817 East 24th Street) that year. 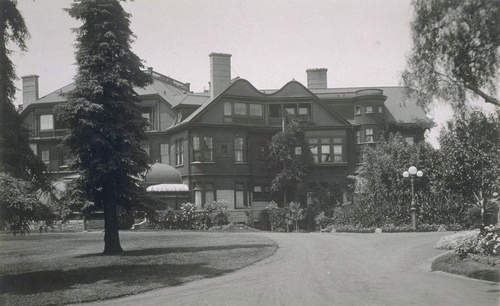 Frank M. Smith home,Oakland (side view) 1 In 1883, the Smiths took in their first foster daughter, Marion Frances Smith. Around about 1893, the Smiths had their “old red house” moved from its hilltop location to just outside Arbor Villa so a … let’s be honest … palace might be built in its place. This sprawling, 3-story, >40-room mansion they called “Oak Hall”. In 1901, the Mary R. Smith Trust for Orphan Children was established. In 1902, Frank turned over 34 acres near Arbor Villa for a Home for Friendless Girls. After 30 years of marriage, Mary died of a stroke at age 59 on New Year’s Eve, 1905.

In 1907, Frank (age 60), married Mary’s former personal secretary, Evelyn Ellis (age 29). They took a train trip through the Southwest to Miami, then visited Cuba and Jamaica on Smith’s steam-powered yacht. Over the next 5 years, Frank and Evelyn had four children: Evelyn, Dorothy, Mildred and Frank, Jr.

After losing his fortune in 1913 and building a new one in 1921, a borax price war drove the price of borax down. In 1928, after a series of strokes, Frank retired and Evelyn Smith took control of the business affairs. They gave up Oak Hall and moved to Adams Point.

Frank died at Fabiola Hospital on August 27th, 1931. He is buried in Mountain View Cemetery in a striking mausoleum along "Millionaire's Row". 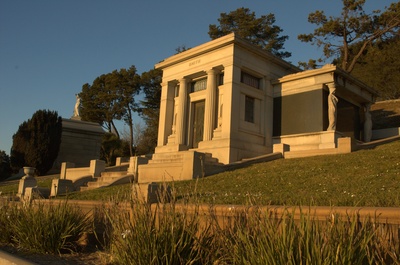