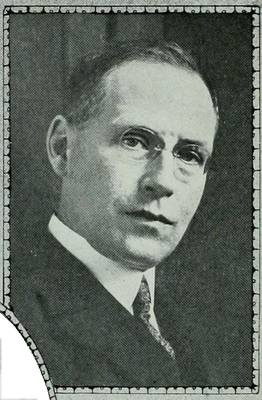 Frank Colbourn 12Frank Colbourn was elected in 1921 and served as the Commissioner of Public Health and Safety at least until 1924, under mayor John L. Davie.

He was a member of the Good Government League 8

Frank Colbourn's spot on the primary ballot was contested by incumbent F.F. Morse who alleged that the ballots were improperly cast and that Colbourn should be left off in favor of Morse.9 Right before the recount was about to be granted, Morse withdrew the suit and allowed Colbourn's name to go on the ballot. He apparently believed that he had worked out a deal with Colbourn that Walter J. Petersen would be renamed Chief of Police and that he would have some control if Colbourn won. Colbourn's political party, the Good Government League denied this, saying that Morse withdrew because he knew he wouldn't win a spot on the ballot even with the recount.10 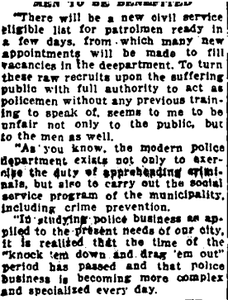 In 1921, as Commissioner of Public Health and Safety, Colbourn proposed a new form of police academy. New recruits would have to study 18 subjects and pass a test. The "police school" would also involve continuing education for current police officers. He believed the department would improve the quality of policing.  Subjects taught would include: "Geography of the city, Elementary principles of the law, Important city ordinances relevant to traffic, nuisances, etc, First aid to the injured, Discipline and deportment, How to make arrests and serve warrants, Classification of crimes, Essential points necessary to constitute certain offenses, Securing and presenting evidence, Court procedure, Making various kinds of reports, Care and use of firearms, Americanized jiu-jitsu, Humane handling of criminals, Gymnastic and military drills, Public health, Police methods and procedure, Identification, finger prints, etc."2

Also in 1921, Colbourn was involved in a new scheme to exterminate rats. A trial run at a building at 12th and Broadway allegedly killed 2500 rats in a single day. A chemist spread a bacteria on a piece of bread and the rats ate the bread, spreading a disease around which proved fatal.4

As Commissioner of Public Health and Safety, Colbourn took a stand against the Ku Klux Klan. In 1922, along with other city officials, he received a letter allegedly from the KKK saying that they had done a safety/vice audit and found Oakland wanting. The letter asked for cooperation with the group.6 In 1924, Colbourn revoked a permit for a KKK parade.7

In 1921, Colbourn founded the Fire Prevention Bureau which made inspections and was in charge of preventing fires. In the first year, the Bureau made over 10,000 inspections.11

Colbourn was a member of the "Order of Red Men."3