Frank King (c.1841 – March 3, 1900) was a laborer at Judson Iron Works in Emeryville. He made the papers when he died, run over by a backing Southern Pacific train while he walked to his home in nearby north Oakland.

King was born about 1841, on Faial da Terra Island in the Azores. He married Bridget Irviney (King), a native of Ireland, and they had two daughters, Louise King (Wemmer) and Mary King (Martin). It's likely they also had a son, Frank King who died as an infant.

Frank was walking home in the rain after work. Somewhere between the iron works and home on Helen St., near the B Street (now 34th Street) Station a train backed over him. According to the newspaper, a brakeman was stationed on the rear of the train and tried to signal the engineer, but to no avail. 1

Most of the King family is buried in St. Mary's Cemetery, plus Mary's husband, Samuel Martin. Records indicate that the house on Helen St. was rented, but Frank owned some properties nearby that were worth a tidy sum. 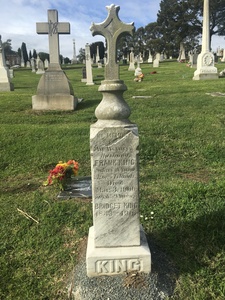 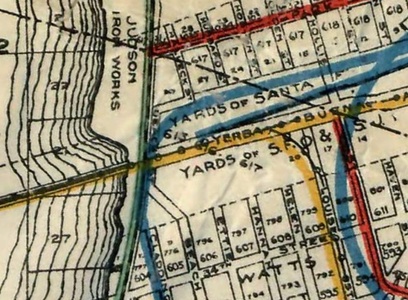