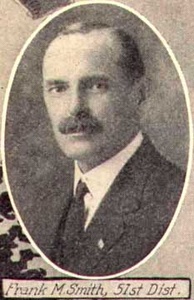 In May, 1913, Frank resigned from the state assembly to accept the appointment as city clerk of Oakland. 2 Apparently it was very common at the time to double-dip by having two public jobs, so the San Francisco Call was effusive in its praise of Smith for not also keeping his position in the assembly: "Mr. Smith's reaffirmation of his personal manhood will be as grateful to the California public as it wilt be distasteful to the shameless double payroll patriots..." 3 Smith was appointed to replace Harold E. Magill, who committed suicide by jumping from city hall. 4 The appointment was made by the executive committee of the council, Mayor Frank K. Mott and commissioners F. C. Turner, Harry S Anderson and Forrest. 5

Smith was also re-appointed in 1916 when then-City Clerk L.W. Cummings was removed from the position because of something to do recall against Commissioner Francis F. Jackson.6 However, he refused the appointment and Cummings remained clerk. 9

Smith was a member of the Progressive Party of Alameda County. 7

There is an obscure family connection to "Borax" Smith. Ruth Aliene's husband, George Carrington Ellis (1886–1970), was the brother of Evelyn Ellis (Smith), the second wife of "the Borax King."

There was also another Frank M. Smith who as a businessman in retail drugs wrote an article entitled Retail Business in the Eastbay District Shows Commercial Soundness for the Oakland Tribune Year Book of 1920 in which he proclaimed "Oakland has assumed an absolutely independent place in the commercial world."