Reverend Franklin Rhoda (June or July 14, 1854 – September 10, 1929) was the second son of Fruitvale settlers Elizabeth and Frederick Rhoda. He was a member of the first (1873) graduating class of the University of California, which by then had relocated to Berkeley from its original location in downtown Oakland. Franklin was one of the founders of the Fruitvale Presbyterian Church, and served as its pastor from 1899 to 1916. 5

In 1900, they were living on Prospect Street (now Laguna St.) in the Prospect Hill area. Clara's parents, Lyte W. Williams and Harriet S. Williams, were also living with them. The 1900 census also listed Bertha Halderson as a servant. Reverend Rhoda died from a heart attack at the family's home at 3711 Lincoln Avenue in September of 1929. 6,7 Widowed Clara and daughter Ellen remained at the Lincoln Avenue address in 1930.

He wrote as a young man, "having been myself rescued from the power of sin, through the love and mercy of Jesus Christ, I have long had an earnest desire to do something that might recommend Him to my friends." 1

In 1880, Rhoda and four others organized a Sunday School in a building at the corner of Boston Ave. and School St. Part of that effort was beginning the Sunday School in Fruitvale, and effort which later become Fruitvale Presbyterian Church, where he served as pastor from July 1899 to August 1916.

He wrote a small book, "Bible Gems". 4 Despite his interest in geology, this was a book of Bible references and quotes, not a geology book.

Franklin was also a geologist, and in his early years he worked in Colorado surveying in the Rocky Mountains along with his half-brother, A.D. Wilson.

In 1903, Franklin was the Prohibition candidate for Supervisor of Alameda County's 2nd District. 3

In 1913, he was a speaker at the Women's Christian Temperance Union of Alameda County. 2

Franklin died September 10, 1929. 6 He is buried in plot 33 in Mountain View Cemetery, along with Clara, Lyte Wilbur, and numerous other members of the Rhoda and Wilson families. Parents Frederick and Elizabeth, and brother Lincoln are buried in plot 12. 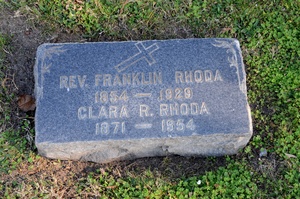