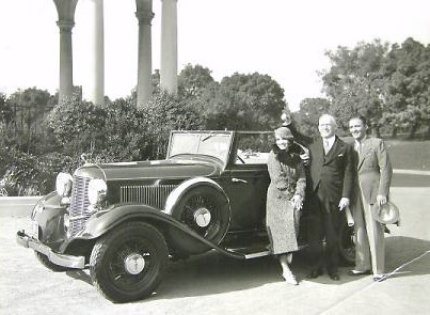 Born in Grass Valley, Morcom was the child of Nicholas Morcom and Rachel Scantlebury Morcom.

He was business partners with artist Thomas Henry Rabjohn in the ownership of an Oakland art supply and farming shop ("The House of Beautiful Things"), which was located 1724 Broadway. 8 After becoming mayor, Morcom "frequently declared that his store saw a sudden decline in business immediately when he took office as Mayor, although his store was crowded with people who wanted jobs or everything else." 6

Frank Morcom was selected as mayor by members of the City Council, a first for Oakland which had previously elected mayors by a popular vote of the citizens. This action was done through a charter aimed at correcting the excesses of Mayor Davie's administration.

The DeMolay safety parade was conducted through the "Oakland business district" on September 26, 1931 lead by Mayor Morcom as the start of a year long campaign by "the safety council for courtesy among motorists as a means of making highways safer." 2

In April 1932 Mayor Morcom withstood an attempt to recall him and seven members of the Oakland City Council through petitions circulated by the Oakland Civic League following the installation of the charter. 3

The Leamington Hotel hosted the annual convention of the Native Daughters of the Golden West in June 1933, with Mayor Fred N. Morcom and Oakland City Manager Ossian E. Carr as guests of honor welcomed the delegates to Oakland for the four day event. 4

Morcom decided not to run for re-election following his only term as mayor due to the $100 a month stipend, and a $15 per council meeting reimbursement which was not enough on which to live. Although he believed in the new council-manager form of municipal government, he felt it was important for the mayor to be elected by the people, and to pay the mayor a reasonably livable salary. 5

The renaming of the Oakland Municipal Rose Garden to Morcom Amphitheater of Roses in honor of Fred Morcom was unanimously approved by the Board of Park Directors on December 30, 1953. Further, the "board ordered that an appropriate inscription be placed on the monument at the entrance of the garden on Jean Street off Grand Avenue and that a dedication ceremony be planned." 7 On January 27, 1933 then Mayor Morcom planted the first of over 7,500 rose bushes; the rose garden was officially opened to the public the following year in May 1934.

Fred N. Morcom resided at 4231 Lakeshore Avenue until his death at the age of 81. Morcom had been "forced into retirement from the City Council by illness in September 1951. His term expired July 1, 1953." 7 He was apparently cremated, but the location of his remains is not publicly known. His obituary merely stated that "private inurnment" would follow funeral services at the Grant D. Miller Mortuaries on Telegraph Avenue. Funeral services for his wife Marion were held at the same mortuary following her death on April 2, 1974, and her obituary similarly does not specify a location for her remains.