Freda Ehmann (1839–1932) was a German immigrant who was a pioneer in the canned olive industry beginning in the 1890s. She was considered to be the "Mother of the California Olive Industry."

Born near Kassel, Germany, Freda Loeber came to Chicago before moving to St. Louis. She met and married Dr. Ernest Cornelius Ehmann, who had immigrated to America after completing medical school in Germany and serving as a surgeon under General Franz Sigel in the Revolution of 1848. Ernest Ehmann established a medical practice in Quincy, Illinois, and in 1892 he died.

E. W. Ehmann, son of Freda and Ernest, who lived in California, asked his mother and sister Emma to move out to California. There she placed all her money with her son for investment, but a financial crash affecting millions caused a loss of all their funds. Although her son considered bankruptcy, Freda Ehmann believed that was not the honorable thing to do and resolved to pay all their debts.

In 1895 Ehmann, a 56-year-old widow with no savings or assets besides her olive orchard, decided to start her own olive business. The 20 acres located in Marysville which had been given to Ehmann by her son, had been planted with olive trees five years before. On the third year an unusually fine crop of olives caused Ehmann to consult Professor Hilgard, Dean of the Department of Agriculture at the State University. He provided Ehmann with a olive pickling recipe and when she returned to Oakland, turned the back porch of her daughter's house into a pickling plant.

Ehmann began with a 20 acre olive orchard in/near Oakland, California in the 1890's.  She experimented with curing a few barrels of olive on her back porch in an attempt to develop a market for olives.

Spring of 1898 Ehmann borrowed money for a trip promoting her olives, traveling to Vancouver, site of the Klondike Gold Rush, and then on to Philadelphia.  At the end of her trip, she had orders for 10,000 gallons of olives, although her orchard at that time could only produce 1,000 gallons of olives.

Ehmann developed an improved method to cure olives and in 1898 moved with her son Edwin Ehmann to Oroville, California.  In 1899 they built their first olive processing plant in Oroville, where she picked olives until they turned an attractive shade of black.

In 1925 the Ehmanns sold their interest in the Ehmann Olive Company and moved back to the Bay Area.

... Uncertain of the result, she dared not assume the expense of piping water to the vats, so that through all the process of leaching and pickling she carried the gallons of water herself.  Passing restless nights, she went to work at five o’clock in the morning, and all through the day and until late in the evening she watched the slow and mysterious changes of the fruit.  When at last she took a jar to the University she felt she had failed completely, because the olives showed every shade of green and brown and purplish black; and her surprise can hardly be imagined when the professor, having examined them, exclaimed, “They are the best ripe olives I have ever seen, and you are certainly an adept at pickling!”

The next chapter in this romantic story is easily told.  Wrapping up another jar of her olives, Mrs. Ehmann hastened to the leading grocer in Oakland, asked to see his best brand of ripe olives, and finding that they, too, were mottled in the various colors, she displayed her own product and sought an order.  The grocer tasted the olives, pronounced them better than any he had had, and without ado bought the entire pickling of about two hundred fifty gallons.  This more than paid for the experimenting and the freight on the balance of the crop, which Mrs. Ehmann at once had sent to her from Marysville, and for days and nights she continued her tests, trying to preserve the natural color of the olives, retain the highest percentage of oil and the delicacy of flavor, and insure a keeping quality, which at that period seemed to be one of the great problems with ripe-olive packers.  At the end of the season she hurried to New York, visited the largest olive-importing concern in the country, and almost contracted for her entire output for the coming season; but the Spanish associates of the manager vetoed his order and he was able to purchase but a couple of casks.  The Hotel Bellevue, in Philadelphia, however, gave her a large order, and this opened the way to other commissions, and Mrs. Ehmann returned home with contracts for nearly fifteen thousand gallons of ripe olives and no idea where the olives were coming from.  Heretofore the biggest commission that she had been called upon to execute was to manage a Christmas dinner; but the conviction that she could pickle ripe olives better than anyone else gave her courage and she went ahead.

“I came back home,” Says Mrs. Ehmann, “and asked my son where he could get the crop of another orchard besides our own.  He knew of a good producing orchard at Oroville, with a pickling plant and a crew of twenty-seven Chinamen.  We contracted for the crop, leased the plant, and I took charge of the place, and before the season was over we had reorders for more than I could supply.  The success that crowned my strenuous efforts created a competitor in the ripe-olive industry in Southern California, and competitors began to thank me for creating an unheard of demand, since they profited by the demand I could not supply.  All I could do was to look about for more olives, to think of plans for building a plan of my own, and to help my son a little with his debts.”

The experience and infinite care of a conscientious housewife were the foundation of the success where men had failed in spite of business training, scientific knowledge, and chemical correctness.  All olive-picklers use the same formula, but there is a wide difference in the results, and the processing of ripe olives is largely a question of individuality.  For many years Mrs. Ehmann has been developing a method entirely her own, which begins with the selection of the proper variety of trees and a very definite plan for cultivation, and ends with the sorting of the olives by hand before they are packed in air-tight tins or bottles.  Even now, when her output goes over a couple of hundred thousand gallons a year, Mrs. Ehmann gives the same watchful care to her work as she bestowed on the first few hundred gallons in the wine casks on her daughter’s back porch.  All through the season, from November until May, she goes all day from vat to vat in the great pickling room, cold, and dark and damp as it is, dipping and testing, testing and dipping, and splashing about in overshoes on a wet floor in a temperature that makes visitors shiver.  Nor does she scarcely stop for Thanksgiving or Christmas holidays, keeping up the incessant round until the season is successfully over.

In 1898, the Ehmann Olive Company was incorporated with a capital of a hundred thousand dollars, and the factory built in the early years was enlarged from time to time.  When it became necessary a new factory was erected from plans suggested by Mrs. Ehmann, who for several years conducted the pickling plant while her son attended to purchasing of commodities necessary to the preparation of the fruit and also to marketing the finished product.  The company has large holdings of land in Happy Valley, Shasta County, where about one thousand acres out of the two thousand are planted to olives.  Not long ago they purchased the Fogg Grove of forty acres at Thermalito, considered the finest olive grove in California.

While Mrs. Ehmann was helping her son to discharge the debts she had counseled him to assume, a well-to-do neighbor who had tired of a hundred-acre ranch, offered it to her for fifteen thousand dollars, on time payments, or twelve thousand dollars in cash, but she was unable to avail herself of the opportunity under either condition.  Three years later she paid forty thousand dollars for the same orchard, half of which price was in cash, and since then she has refused fifty thousand dollars for the property.  “It takes nerve to plant trees that required from five to seven years to come into bearing,” adds Mrs. Ehmann, “and therefore the business will never be overdone, but once the olive trees have come into bearing there is the assurance of an income for a life time, for I have pickled olives from trees planted by the Mission Fathers one hundred twenty-five years ago, and they were as fine as olives from trees twelve years old.  I believe that if other women would plant a few threes such as I did, they would have the same pleasure and the same success in watching them grow into a great olive orchard.”

Mrs. Ehmann, now about seventy-eight years of age, dwells in a lovely residence at Oroville during the winters, when she is in close association with her daughter, Mrs. Emma H. Bolles, and her son E. W. Ehmann; while in the summer time she resides in her residence on Staten Avenue, Oakland.  The family attend the Congregational Church, and Mrs. Ehmann, who is a stanch Republican, is an active member of the Monday Club of Oroville, and is very loyal to the land of the Stars and Stripes.  To Oroville the family has presented the Ehmann Playground, in charge of the Y. M. C. A.—a quarter of a block, where children under twelve years of age can play unmolested and safely protected, to their heart’s content. 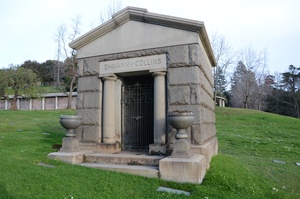 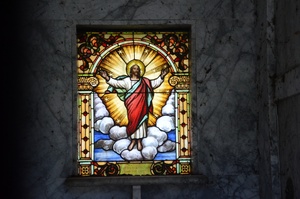