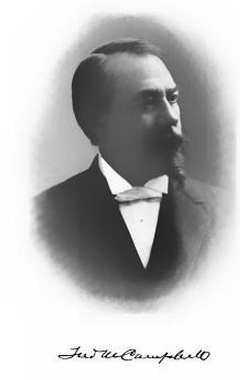 Campbell was a well known educator in his day. Originally from New York, Campbell was married to Catherine Marston (Campbell). They moved to Vallejo, California in 1858 to work at a school there. 6 He took charge of the College School in Oakland (which later became the University of California) in 1861. 3,9

Campbell was mentioned fondly in a book about public education in 1911 2 and served as the State Superintendent of Public Education. Along with John Swett, he is credited with fixing the "code and custom" of California's system of public education. 6 The Golden Gate Kindergarten Club called him a most valuable friend and the best friend of Kindergarten. 3 He was the editor of the California Educational Review. 4 Because of Campbell, the National Education Association convention was held in Oakland in 1888. 6

In 1876 the Campbells resided on the northwest corner of 5th and Market Streets; in 1877 the family lived at 5th and Myrtle. Later still they lived at 1262 Webster (now in 1400 block after renumbering).

For a time c.1903, Campbell worked as the personal secretary for then congress member Victor Metcalf.

Campbell Street in West Oakland was named for him. 7 Following his death in 1905, the Grove Street School was renamed the Campbell School. 8

Marston Campbell Park was named for his son, Marston.

Other Positions in Government

1870: Superintendent of Public Schools in Oakland 3