Frederick Rhoda (1810 – November 11, 1886) was a farmer with over 400 acres (some sources say 217 acres) of orchards in the Fruitvale District of Oakland adjacent to Sausal Creek. Rhoda grew Royal Ann cherries on his property. After the transcontinental railroad reached Oakland in 1869, he shipped some of his cherries to New York City via Saint Louis, where his cherries sold for $5.00 a pound—the first shipment of fruit ever transported to the East Coast from California. 2

Rhoda Street is named for the family, and Lincoln Avenue was named for one of their sons. Another son, Franklin Rhoda, was a founder of the Fruitvale Presbyterian Church.

Rhoda was born about 1810 in Stettin, Prussia, in what is now Poland, though it's listed as Germany in U.S. Census data. He married Elizabeth Donaldson (Wilson) Rhoda (February 15, 1821–January 13, 1881) in 1849 in Iowa. It was the second marriage for both of them. Frederick had one son by his first marriage, William C. Rhoda (1840–1929). Elizabeth had had two sons by her first marriage, Allen David Wilson and James P. Wilson. Frederick and Elizabeth had five children together:

By 1860, the Rhoda family had moved to Oakland.

The family farmhouse is still standing at Wilbur and Whittle. 3 Daughter Ellen Rhoda Brendemuhl and her husband lived in the home at 4300 Fruitvale Avenue. 4 Note that Fruitvale Avenue did not extend all the way to the house when the house was originally built. 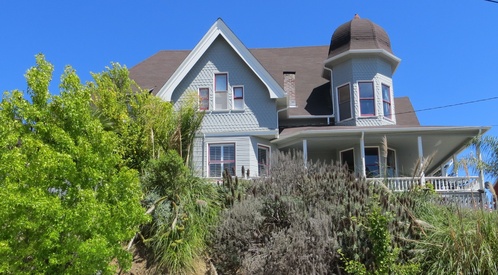 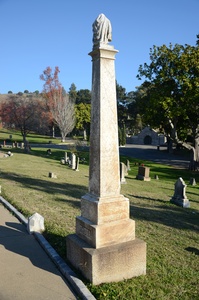 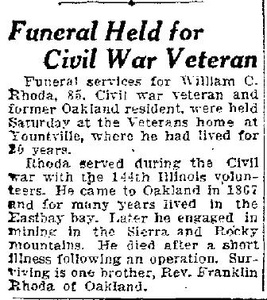