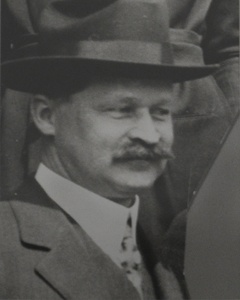 The Soderbergs are buried in Mountain View Cemetery in the Stoer family lot in plot 33. [ don't see Katherine; need to confirm ]

Soderberg designed the Jenny Lind Hall at 2216 Telegraph, which now houses a Buddhist Association, a house on Park Blvd. for Louis Schaffer, and a school in Emeryville as well as the 1903 City Hall there (before it was rebuilt). He participated in the contest to design San Francisco's City Hall. He also built a house on Lakeshore Ave. for Mrs J. J. Shoo.

He designed several firehouses in Oakland: a firehouse on Magnolia and 14th,7 and what was formerly Station 11 at 817 Alice Street in 1909. The station was converted in 1966 to a private residence when Fire Station 12 was built across the street. Soderberg also designed the Brooklyn Firehouse. There was another at 25th and Broadway.

He had an office in the Union Savings Bank building, although one source stated that his office was in the First National Bank building in 1918. (ref)

It appears Soderberg may have had a brief partnership with Charles W. Dickey. In 1904, "Soderberg & Dickey" were awarded the design for a new school building at 39th and Market. 5

Soderberg had a disagreement with his former draftsman. In 1907 he filed suit against Victor Dunkerley, alleging that Dunkerley was still collecting funds owed to the partnership, and not giving a accounting of them or a fair share. 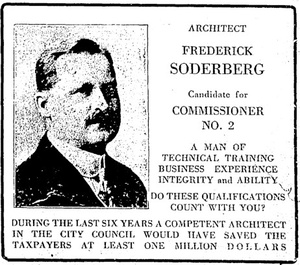 Soderberg was with the Taxpayers Party.

In 1917, Soderberg raised a stir by refusing to buy a Liberty Bond. Of Swedish decent, people accused him of being pro-German. He refused comment, though some called for his resignation. 1

In 1920, in official capacity, he rented the Municipal Auditorium out to some Japanese performers for $300 for 3 days, and the city looked into it, alleging that the price was too low.3

In 1920, Soderberg, and his council colleagues Fred F Morse and William Edwards were the subject of another recall. Soderberg was the primary target and Morse and Edwards were backup candidates for removal. Unsurprisingly given the political climate, the reason given was forming a "combination in political bickering detrimental to the city of Oakland." 2 The recall was ruled out because many of the petitions weren't properly signed.