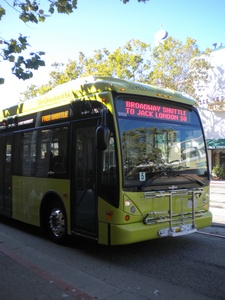 CC SA-BY Our Oakland
Commonly called "The Free B" or just "The B" shuttle, the Free Broadway Shuttle provides free public transit between BART, Jack London Square, and points around Downtown Oakland.

Developed as a trial project, it has been a runaway success and had service expanded in the last couple years. An enterprising Stanford design student has proposed a plan to take the bus route and turn it into light rail [source]. 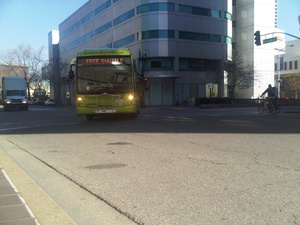 The "B" - Free Broadway Shuttle, photo by Himy