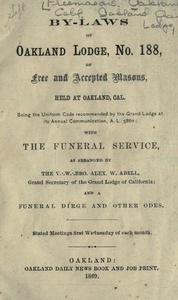 By-laws of Oakland Lodge, No. 188, of Free and Accepted Masons published 1869 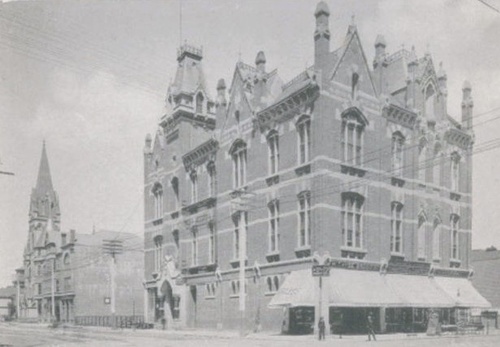 Freemasonry is a worldwide, fraternal organization with roots dating to medieval times. The Freemasons (or Masons) have a long, influential history in Oakland, with many leading citizens working together for the good of the community, as well as for their own individual benefit. Although the existence of Freemasonry is public, many of its aspects are secret.

Found the following answer to a question from a concerned woman dating a Mason, asking what a Freemason is. Thought it was a good explanation of the organization and why the members have been so instrumental in the history of community building, including Oakland, California. Am posting this temporarily for informational purposes, and then will delete in a couple of days.

”The tenants of our [Freemason] fraternity are brotherly love, charity, and truth. We are not a religion and we are not a cult.

If you know what a stone mason is, you are familiar with some of the jobs that a Mason might have, as far as building with stone and brick. Masons use certain tools and concepts to do their work. These are called operative Masons.

Freemasonry is also referred to as speculative Masonry, and this is a fraternal organization that (to make things simple), assigns certain ideas or principles to the working tools of operative Masons, and uses these to teach certain moral lessons. Our group is a fraternity based on this concept of conveying intangible ideas through the use of symbolism derived from ancient Masonic teachings.

As an example, Masons use a square to make sure that structures adhere to perfect angles. We may use this to remember to square our actions with others (to deal with people squarely and fairly). Also, an operative Mason uses a level to make sure that something is evenly perpendicular to the ground. Speculative Masons use this to teach that we are all equal and on the level with others.

Those are just a few examples of how Freemasonry and operative masons are related. However, it is not required that Freemasons be operative masons. We are bankers and ditch diggers, waiters and software engineers, preachers and bartenders, and all other occupations.

While it was pretty common for men at the time of the founding of the United States to be Freemasons, not all of the Founding Fathers were brothers. Ben Franklin, George Washington, Paul Revere were members, but John Adams and and others were not. Thirteen signers of the Declaration of Independence were Masons. The reason that so many were members is because the Masons believe in freedom and equality, so it stands to reason that men of such belief would be involved in the creation of our country. It should be mentioned, however, that this political activity was not done as an act of the Masons. In fact, many Masons at the time were also loyal to England.

There are a lot of conspiracy theories about the Freemasons out there, and many outrageous claims that we are Satanists or that we rule the country. First, how could an organization that gives about $2 million dollars A DAY to charity be an evil organization. Second, we are forbidden to discuss politics in our lodge meetings, so it would be pretty difficult to run a country while not speaking of politics.

Also note that all of these crackpot accusations about the Masons are made by non-Masons … so they really wouldn’t know what they are talking about, would they?”

History of Freemasonry in Oakland 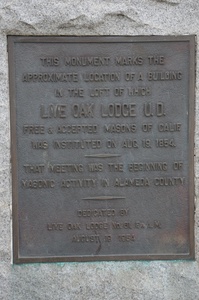 The first meeting of Freemasons in Alameda County was on August 19, 1854, in the loft of a building at the foot of Broadway. The Live Oak Lodge was started at that meeting. A plaque placed in 1954 commemorates the meeting.

Dr. Enoch H. Pardee was a Freemason and with others, organized the Oakland Lodge, No. 188 in Oakland on March 16, 1868. He was Junior Warden, then was elected Master in 1871. His only son, Dr. George C. Pardee received degrees of Masonry and presided in the Oriental Chair of the Lodge which he created. 2

Listed below are all the F. and A.M. (Free and Accepted Masons) Temples, Chapters and Lodges from the 1887 directory:

Past Masters of Live Oak Lodge 61

Past Masters of Oakland Lodge 188