There is a new mural on the wall of the overflow lot for the Fruitvale BART station parking lot between Fruitvale Avenue and 29th on E. 12th Street. The mural is on the back of the new Norton Factory Studios.

The mural is part of a project by the LQV gallery and is done by the Groundscore Collective. Ernest Doty painted the parrot. Brett Flanigan, Cannon Dill, and Koleo also painted parts. 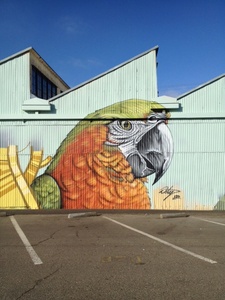 the other half of the mural (photo by greenkozi)