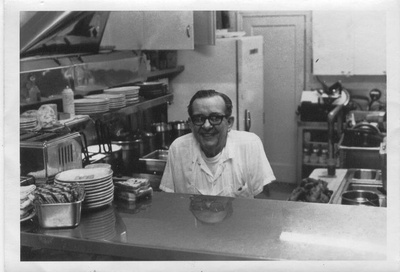 The Fulton Lunch was a cafe, first at 1528 Franklin Street, and later at 381 - 15th Street. For a time it was known as Jack and Betty's Fulton Lunch. It was in business from 1932 to 1978. It was also sometimes called Fulton Fountain Lunch.

It was run by members of the Arnold family, descendants of E. S. Fenton. The 1939 Polk's directory lists E. D. (Elbridge "Jack") and F. D. (Fenton) Arnold. 1 The name was selected because the cafe was next to the Fulton Theatre (originally the Bishop Playhouse; later the Franklin Theatre.) 2

According to a family member, Oscar Arnold, the father of Elbridge, Fenton and sister Ora Ruth gave them each $1000, which they used to buy the cafe. Ora Ruth moved to Long Beach and was bought out; Fenton was eventually bought out; Jack met Betty and it became Jack and Betty's Fulton Lunch. 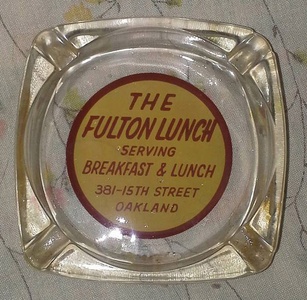 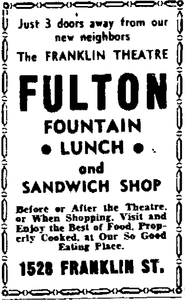