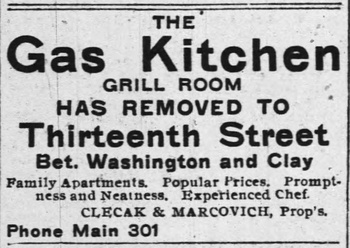 The Gas Kitchen Grill Room (or Gas Kitchen Restaurant) was a downtown restaurant from 1898 until 1909, run by John J. Marcovich and Antone “Tony” Clecak. It made the headlines in 1907 when Marcovich was shot and killed by Frank Smith, a waiter who had been fired earlier for stealing. Clecak sold the restaurant in 1909. 5

About 1898, Marcovich and Clecak opened the restaurant at 1062 Washington between 11th and 12th Streets. 1 In 1900, they moved the restaurant to 515-517 13th Street between Washington and Clay. 2 Besides occasional mentions for things like shooting at an attempted burglar in 1901 3 or news of Marcovich's personal life,4 things were relatively uneventful until 1907.

On the night of April 19th, 1907, John Marcovich was overseeing the running of the restaurant. He had married his second wife, Jennie Brown (Marcovich) just a few months before, and after an evening at the theatre, they were seated at Marcovich's customary table, the first on the left side of the room. Shortly before 11PM, George Neece and his wife came into the restaurant and were seated. Marcovich left his table to greet them, when Frank Smith entered the restaurant.

Smith had been a waiter at the restaurant for some months. The exact details are a bit jumbled, but he was accused of stealing and been fired earlier that day, either by Marcovich or his partner Clecak. Regardless, Smith felt his reputation had been ruined, and returned to the restaurant to seek revenge. He opened fire on Marcovich, emptying the contents of the revolver and hitting him 5 times. He said nothing, but backed out of the restaurant, and headed down 13th Street.

Jennie rushed to his side and piteously called to him. Marcovich struggled to turn onto his side, and said a faint "Good bye, Jennie." It was clear that he had been gravely wounded. The police were called, a car was summoned, and Marcovich was rushed to the receiving hospital, but it was too late. He breathed his last, and he was declared dead by Dr. Irwin. 6

The cause of all this mayhem was probably $2.50, the price of a bottle of wine which Smith was accused of stealing. But now Smith faced murder charges as well as theft. 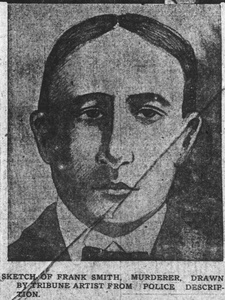 With multiple eyewitnesses and little traffic in the streets, you might think Frank Smith was quickly apprehended, but it was not to be.

William Wichter, a shareholder in the Blake-Moffitt Company, lived nearby at the Hotel Metropole and was out for a stroll on 13th Street. He heard the shots fired and witnessed the commotion, and saw Smith leave the restaurant. Believing Smith was carrying a weapon, he didn't try to apprehend Smith, but followed him. He recruited two others, including a motorcyclist, to keep an eye on Smith, and returned to the restaurant where he tried to get the police sergeant who had arrived to pursue Smith. The officer refused, saying his first responsibility was to get the injured Marcovich to the hospital. Wichter then tried to get another officer to commandeer a nearby car, but that officer refused, too. He then went directly to the police station, and after 5 minutes of urging, finally got the police to dispatch an officer. But by then Smith was gone, and the people trailing Smith gave up. Wichter was furious, and demanded an investigation by the board of police commissioners. 7

Frank's wife, Mazie Smith, said that Frank showed up at home suddenly that night, told her he had shot Marcovich, and that he had to leave her for a while. He rushed out the door, and that was the last Mazie saw of Frank. She couldn't imagine he would commit murder, but she was sure that Frank would kill himself or shoot at police rather than be captured. 8

Spurred into action by Mayor Frank Mott, the police attempted to track Smith's trail after leaving the restaurant, and they discovered an important fact: Frank Smith was in reality Ed Short or Samuel Short, a man who was a U.S. Army deserter.22 But they could only track Smith as as far as a Mrs. Murray's at 14th and Market Street. Smith had stopped there to ask her to look after his wife, but Mrs. Murray said she had her own affairs to look after. It was thought that Smith then fled to San Francisco, where the police searched spots that Smith was known to frequent. 9 The San Francisco Examiner reported that Frank Smith had been in prison in Illinois for murder, and had escaped. 20 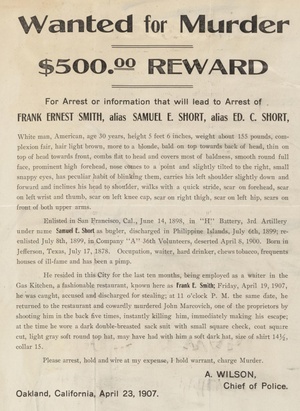 A few days later, the police thought they might have their man. A report came in from Hayward of the arrest of a suspicious person matching Smith's description. Captain Petersen and Detective Hodgkins were sent to Hayward as quickly as a car could carry them. While the suspect looked something like Smith, after careful questioning, they determined he was not Frank Smith. 10

The following month, a decomposed body was found in the estuary off Peralta Street, an apparent suicide. Could this be the body of Frank Smith, AKA Ed Short? Tony Clecak, Marcovich's partner, seemed to think so based on a number of details such as the type of shirt and a gap in the teeth, 11 but Mazie Smith didn't think it was her husband. An autopsy was performed and the body carefully examined. Based on scars on the body and the height, and the wrong hair color, Dr. J. L. Milton determined it was not Smith, and the body was buried in a Potter's Field. 12

There were various other mis-identifications, including a "bandit" shot and killed by a posse near Willows, CA, that turned out to be Count Otto von Waldstein, formerly of Austria. 19

More than a year later in November 1908, police chief Adelbert Wilson received a telegram from officials in Seattle. A man matching Frank Smith's description had been arrested in a northern logging camp. An officer was to be dispatched to escort the prisoner back to Oakland. 13 But this was apparently another mis-identification, as no further references are found in the papers.

A full 10 years later, Oakland police received photographs from St. Louis, MO, and they positively identified him as Frank Smith. Inspector St. Clair Hodgkins was to be dispatched as soon as extradition papers came from Sacramento. Smith had been living under the name Charles Clark. He was found because J. Miller wrote from St. Louis to now chief Walter Petersen and said he knew where Frank Smith could be found, and what's all this about a reward? 14

Upon arrival in St. Louis, Inspector Hodgkins said that Smith had confessed to the murder. 15 Smith was arraigned on murder charges, and a preliminary hearing set for June 13th. 16 Mrs. Marcovich testified that Smith had shot her husband 10 years ago, but because of the time passed, she couldn't identify the man in custody as Smith. Others were able to identify him, though. 17 Smith plead not guilty, and the trial was set for August 20th. 18

But before the trial, Frank Ernest Smith plead guilty, and was sentenced to life in prison for the murder of John Marcovich. Judge Ogden didn't give Smith the death penalty as was common in those days for murder, and said:

"In the natural anger following the accusation which you felt to be unjust you killed Marcovich. Your reasons were not mercenary. They were not of the ordinary sordid kind which lead to murder and for that reason I cannot pronounce the death sentence." 23

And then less than 10 years later, Smith was granted parole from San Quentin. 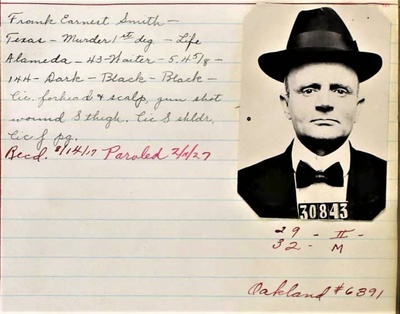