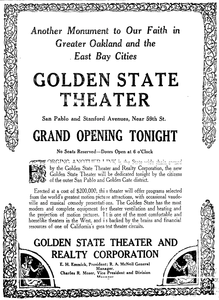 The Gateway Theatre was a 1,159 seat theater on San Pablo Avenue in North Oakland. Since the 1970s, it has been home to the Star Bethel Missionary Baptist Church.

It was originally built as the Golden State Theater and opened on February 13, 1926. 4 The architect was Marc T. Jorgensen, and it featured a large pipe organ built and installed by F. W. Smith & Son of Alameda.

On May 1, 1937, it hosted the Midnite Variety Show. The show was sponsored by the East Bay Council of the National Negro Congress, and supporters included Slim Jenkins' Club, the Brotherhood of Sleeping Car Porters, and Mrs. C.L. Dellums. 3 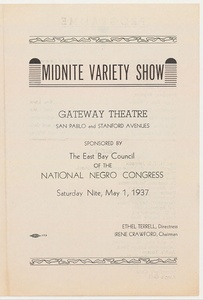