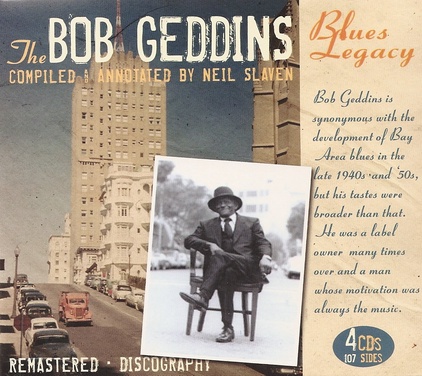 Robert L. "Bob" Geddins (February 6, 1913 - February 16, 1991) was an African American blues musician and record producer in Oakland, California.  From 1948 onwards, he founded and owned numerous small independent record labels, including Art-Tone, Big Town, Cavatone, Down Town, Irma, Plaid, Rhythm and Velton.  He moved to Oakland during WWII and worked up until his death.

According to the Bay Area Blue Society, "Bob Geddins, the Godfather of Oakland Blues was the owner of Big Town Records, a recording studio located on the corner of 7th & Center Streets.  During the war era, Big Town Records had moderate success recording local gospel artists.  In 1946, after meeting singer and guitarist Lowell Folsom, Bob Geddins’ Big Town Records made the switch to blues and Oakland made its mark on the musical map forever.

Bob Geddins was the first African-American in the bay area to own a record plant and recording studio.  He was the first African-American to have numerous record labels.  He set up his own distribution network by loading them in the trunk of his car and taking his records all over the United States from Los Angeles to Texas or any other city where hot blues was played."