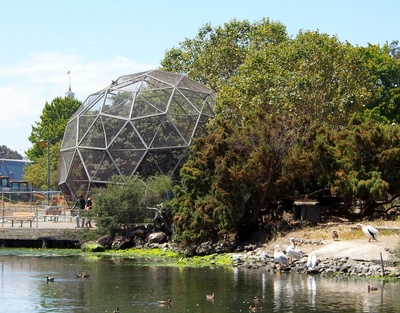 The Geodesic Bird Dome is a part of the Lake Merritt Wildlife Refuge in Oakland, California. Built in the 1950s with materials supplied by Kaiser Aluminum and Chemical Corporation, it was used for years as an exhibit cage for a variety of wild birds, but in later years was utilized as a cage for sick and injured birds. 1 It is currently unused.

A plaque on it says "designed by Buckminster Fuller", which is incorrect. Fuller did the math behind geodesic domes and did much to popularize them, but was not the inventor of them. 2 This particular dome was designed by William Underhill, Gordon F. Tully, Dick Schubert, Dan Peterson, and Marshall K. Malik, who were architecture students at UC Berkeley. 3