This is where things get a little more interesting. Somewhere along the line George purchased a plot in Evergreen Cemetery. George and Hattie clearly wanted the plot to be noticed, because it is adorned with one of the largest, most distinctive monuments in the entire cemetery. It's nothing compared with some of the huge mausoleums in Mountain View Cemetery, but it stands out in Evergreen. On the monument is a bas relief carving of James Earle Fraser's "End of the Trail", which was originally cast for the 1915 Panama-Pacific International Exposition held in San Francisco. Perhaps George and Hattie saw it there. George died in 1931 and is buried in Evergreen; Hattie died in 1938 and is also buried there. There is a third marker, "Father, Born 1820 Died 1897", which is presumably George's father. 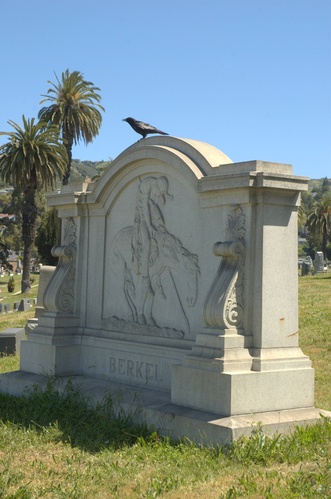