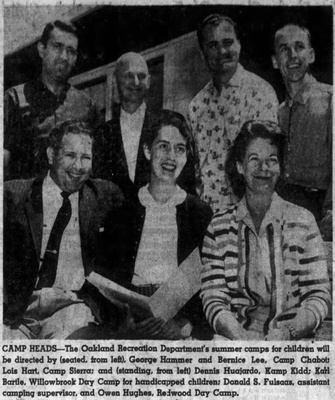 George Campbell Hammer (February 22, 1929 – July 13, 1961) was a training specialist for Oakland Parks and Recreation, head of Camp Chabot for boys, and the namesake of the George C. Hammer Amphitheatre in Montclair Park.

Hammer was born February 22, 1929 in Oakland to George Hammer (1888 – 1962) and Beulah Jean Campbell (Hammer) (1894 – 1971). His father, George Hammer, worked as a salesman and an engineer; he was a veteran of WWI where he had served as an engineer with the rank of sergeant. [ NB: This was a different George Hammer than the co-founder of the Hammer-Bray Company. ] The family lived at 3407 Maple Avenue.

George C. was too young to serve in WWII, and in 1947 at age 18 he worked for Schwartz & Grodin, a downtown men's clothing store. But he served in the army signal corps from 1950 to 1952 during the Korean War.

Along with other duties for Oakland Parks and Recreation, Hammer was the head of Camp Chabot for boys from 1954 to 1958, and again in 1960.

In 1961, Hammer was to be head of Camp Chabot again, when he died unexpectedly at age 32 just weeks before the camp was to open. Jay M. Ver Lee, the superintendent of recreation quickly appointed a replacement, Clarence Girtch, who was head of the Bushrod Recreation Center. 2 Hammer's remains were interred at Golden Gate National Cemetery in San Bruno, where his father (1962) and mother (1971) were later buried. 5

In his memory, a small amphitheater was constructed in Montclair Park and dedicated in 1962. 3 Scholarships for camp had been given to deserving youth in Oakland. Following his death, the scholarship was given in Hammer's name. 4