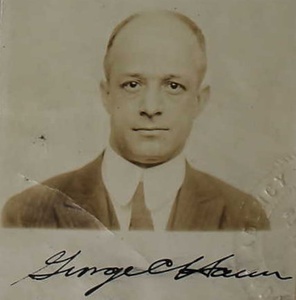 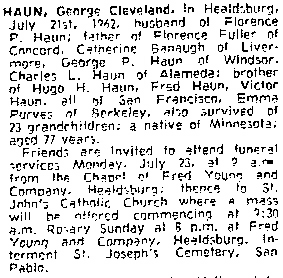 George Cleveland Haun (April 18, 1885-July 21, 1962), the son of C. C. W. Haun, San Francisco Contractor, and Emma Wachsmuth Haun, was born in Minneapolis, Minnesota, on April 18, 1885.  During high school, George went to work for his father in the construction business and thus did not graduate.  He attended the University of California, Berkeley, California, where he graduated with honors in civil engineering, receiving the degree of Bachelor of Science in 1912.  At the University of California, he was elected to membership in Sigma Xi national scholarship honor society.

After graduation, Mr. Haun worked for the San Francisco Bureau of Architecture on the design of the present Civic Auditorium.  After this assignment, he went to work for the American Bridge Company, division of U.S. Steel Corporation at Gary, Indiana, where he worked with Charles Dencer until 1915.  At this early date, his skill in steel design was very evident and he was transferred to the company's Chicago office where, as a design engineer, he took part in the design of numerous buildings and bridges, including many of the well known Bascule bridges in Chicago, such as the Michigan Avenue and Franklin Orleans Bridges; and, also, the Hurricane Gulch Arch Bridge and the Susitna Bridge in Alaska.  The Susitna Bridge was the longest single span steel bridge at the time of construction.  Mr. Haun also did the development design work on the Abt Bascule Bridge in Detroit.

Mr. Haun left the American Bridge Company in 1922 to go to Shanghai, China, where he served as Chief Design Engineer for Jesse E. Hayes Corp., Engineer and Contractor.  In 1924 he returned to California and, as Chief Bridge Engineer for Professor Charles Derleth of the American Toll Bridge Company, designed the sub-structure for the first Carquinez Bridge.  At the conclusion of this project, he returned to San Francisco and engaged in contracting with his brother, under the name of C.C.W. and H.H. Haun, Contractors.  The firm built buildings, streets and sewers.

During the war years, 1943-1944, Mr. Haun worked with his friend from his earlier American Bridge Company days, Mr. A.F. McClean, in the design of shipyard facilities in San Francisco and Alameda for the Bethlehem Steel Company.  At the conclusion of this work and during 1945, he designed an Air Force marine terminal for Gould and Engle, Engineers in San Francisco.  After completion of this work, Mr. Haun went to work for Austin W. Earl and its successor firm, Earl and Wright, in San Francisco, where he remained, except for a short period in the early 1950's, until 1958 when he retired due to ill health.

During Mr. Haun's stay with Earl and Wright, he was in charge of the design of a number and variety of structures, including a Marine Terminal for the Standard Oil Company of California in Richmond, California; a Marine Terminal for the Union Oil Complany in Oleum, California; Bulk Sugar Handling Facilities for the California & Hawaiian Sugar Refining Corp., Ltd. at Crockett, California; and design of erection equipment and methods for constructing the Richmond-San Rafael Bridge, California, and the Glen Canyon Bridge at Page, Arizona.  In connection with the Richmond-San Rafael Bridge, Mr. Haun designed the 280 ft. span aluminum alloy falsework trusses, which weighed 115 tons each and were reused on 36 spans.

Mr. Haun was a skilled designer who had the additional qualification of excellent judgment, which when coupled with his experience, gave a feeling of great confidence to those with whom he worked.  Mr. Haun was a licensed Civil and Structural Engineer in the State of California.

On February 1, 1919, Mr. Haun was married to Florence Phillips, daughter of Judge Dixon L. Phillips, in Oakland, California.  He is survived by his widow, two sons, George Phillips and Charles Lawrence; two daughters, Florence E. (Fuller) and Catherine Marie (Banaugh), three brothers; one sister; and 23 grandchildren, of whom he was quite proud, including 11 grandsons and 12 granddaughters.