George William ("G.W.") Fisher (March 28, 1840 – October 8, 1919) was the founder of the Fisher Lumber Company. He had previously been manager of the Oakland branch of the Puget Sound Land and Lumber Company. 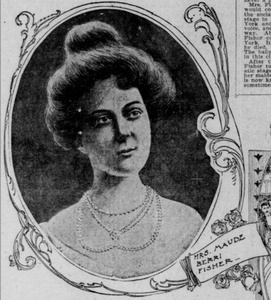 Frank graduated from UC Berkeley's dental school in 1891 and set up practice in Oakland. He married Maude Lillian Berry (Fisher), known by her stage name, Maude Berri Fisher. She was an opera singer of note, and she and Frank had a daughter, Berrita Maybelle Fisher (Cox). To further Maude's career, they moved to New York City, but Berrita was often with Frank's parents in Oakland or visiting with Maude's parents in Fresno. Sadly, Frank died in 1900 at age 31, following an operation for appendicitis. 2 Maude later remarried.

Abbie died in 1917. George was a patient at the Hillside Sanitarium for an unspecified ailment. After his daughter-in-law was a no-show for a planned visit, he shot himself and died a a few minutes later. 1 George, Abbie, and Frank are all buried in Mountain View Cemetery.