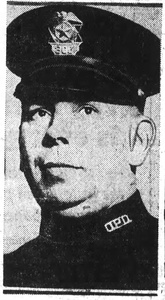 George Ross Morrison (May 11, 1894 – December 5, 1952) was a patrolman for the Oakland Police Department, most notably during Prohibition. He was also the first owner of 3930 Lyman Rd.

The 1920 census lists Morrison living on E18th St. with some of his siblings, and his profession as blacksmith. On March 30, 1922, George and 33 other new policemen joined the Oakland Police Department. 4 All of his early police career was while Prohibition was in effect (1920-1933), so his many newspaper mentions for arrests and other police activities center on that. He was part of the Morals Squad under Sergeant William Ramsey, which also combated illegal gambling. 6,7 A 1930 article describes Morrison as a patrolman, and head of the plain-clothes police "dry" squad. 5

It wasn't all bullets and battling booze. In July 1924, calls came in about a woman screaming near the lake. Members of the homicide squad dashed off to investigate, picking up Morrison in route. He explained to them that the 'cry' was the father of a new lion cub born at the zoo (which was then at the Snow Museum), and had them tip-toe over to see the new cub, Rollo. 8

The Business of the Battered Barber

In March 1932, Morrison's name was again in the newspaper, but not for a good reason. After John Goodwin had finished cutting George's son Clifford's hair at Goodwin's 3443 Fruitvale Ave. barbershop, George walked in and expressed his displeasure at the way it had been cut. First verbally, then with fisticuffs, knocking loose two of Goodwin's teeth. Goodwin called the police, and when they arrived, Morrison and Goodwin were still quarreling. Goodwin declined to have them arrest Morrison on battery charges, but he filed a complaint with OPD Chief James Drew the next day. 9

There was an investigation, and Chief Drew fired Morrison, which was approved by city manager Ossian Carr. It was noted that Morrison had had a previous reprimand for fighting...with the father of champion boxer Max Baer, Sr.! 10 (NB: the article has a couple of mistakes, including the name of George's son, which was Clifford, not George, and Max Baer's father, which was Jacob, not Herman.) This looked to be the end of George's career in law enforcement.

But hold on! Morrison appealed the decision, and after a marathon session of the civil service board with more than 50 witnesses called, Morrison's punishment was reduced to a 60-day suspension without pay. 11 (NB: John Irish was apparently a member of the board.)

This wasn't the end of things, though. Goodwin then filed a lawsuit for $2,557.50 against Morrison; $57.50 for medical expenses, $2,500 for damages. 12 It's unknown how this lawsuit was resolved. This still wasn't the end of things. City manager Carr wasn't happy with Morrison being reinstated, since he had approved the firing. He felt that the board should have either upheld the dismissal, or found the charges false and reinstated Morrison with no penalties. 13 The civil service board defended its actions saying dismissal was excessive, and noted that the 60-day suspension without pay amounted to a fine of $400. 14

Morrison died at 58 years old on December 5, 1952, after a long illness. A funeral was held at Clarence Cooper Mortuaries, and he was interred at Mountain View Cemetery. 2,3