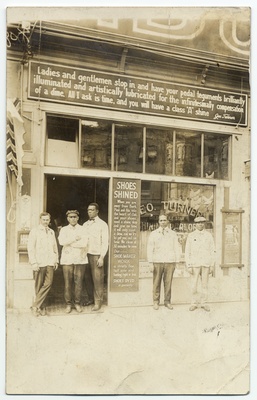 George J.P. Turner (April 1861 – November 3, 1919) was a noted shoe shiner or bootblack. His parlor was in several locations over the years, all near 14th and Broadway. He's remembered in large part because of a photo that exists at the California State Library (CSL). His obituary describes him as a "natural-born vaudeville artist." 2

Ladies and gentlemen stop in and have your pedal teguments brilliantly illuminated artistically lubricated for infinitesimally compensation of a dime. All I ask is time, and you will have a class "A" shine. -- George Turner 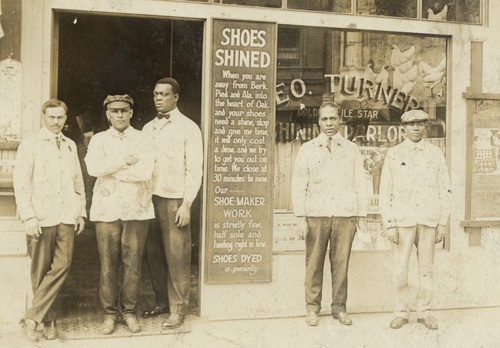 Information about him is difficult to find. Turner was probably born in April 1861 in Virginia.

He married Josephine D.A. Valentine (Turner) on March 25, 1889. They went to the county clerk's office and wanted to be married at once. The deputy clerk informed them that there were a number of justices of the peace on Broadway that could do it, but they wanted a higher authority and asked if a superior court judge could perform the ceremony. A copy clerk in the office, John Gohrman, offered to help, and found Judge John Ellsworth available. It was Ellsworth's first marriage ceremony. 3 The 1900 census lists the Turners at 1123 San Pablo (near 26th St.); the 1910 census lists them at 1064 - 32nd Street. As far as can be found, the Turners didn't have any children, but may have adopted two. 10 The 1910 census also lists Lucretia Walker as a cousin-in-law and Jessie L. Walker as a 2nd cousin-in-law. Lucretia was widowed, and Jessie was probably her daughter.

Through much of the 1890s, it appears Turner worked as a porter for J. Tisch, who had a barbershop near 14th and Broadway. It's unknown exactly when he switched to shining shoes, but his obituary suggests around 1899, and in 1903, the city council passed a resolution allowing for him to construct a 32'x8' corrugated metal building near the narrow gauge train station to use as a shoeshine stand. 4 His stand was there until 1912, when he was compelled to move. But he didn't move far, to 411 - 14th St. in a building next to the MacDonough Theatre. 5 The 1911 Sanborn map labels the building "Boot Black" and also shows 411 - 14th nearby.

Looking carefully at a 1909 photo of Albert Vander Naillen and Captain Park A. Van Tassell's launch of the City of Oakland balloon shows the same Tribune sign which is partially visible in the CSL photo, placing the photo at 411 - 14th St.

Given that the parlor was at 411 - 14th St. from c.1912 to at least 1918, the CSL photo was likely taken in that time range. But looking carefully at the details of photo, there's a poster for the Pantages Theatre near the right side. Much of it is illegible, but "Co-Eds" is visible near the top, and "Clara ??? Co." with a production called "Self Defense" is visible near bottom. Searching on those in old Oakland Tribune editions turns up a brief article from October 1, 1914, describing the latest offerings at the Pantages, including "'The Fair Co-Eds,' Menlo Moore's newest musical tabloid of campus life" and "Clara Beyers and co. in a tense playlet entitled 'Self Defense.'" 8 Also supporting the late 1914 time frame is a poster for DeWolf Hopper in "Trial by Jury" at the Greek Theater in Berkeley, which is mentioned in a September 25, 1914 article. 9 (DeWolf Hopper was married to stage and silent film actress Edna Wallace Hopper for 5 years.) 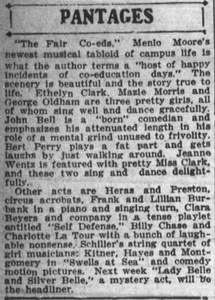 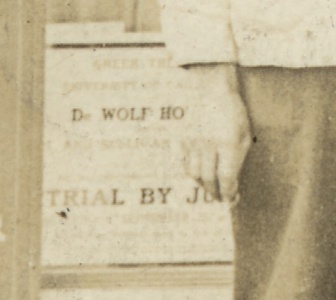 Another question about the photo is: is George in the picture? Based on George's age at the time of the photo (about 55), my guess is that George is the man in the doorway with his arms crossed. The CSL photo doesn't identify any of the people in the photo, so this is just a guess.

The 1913 directory also lists him having a stand at 511 - 14th St. directly across from city hall, but that doesn't appear in later directories.

Turner seems to have been fairly successful. In 1906, he and Josephine purchased property in the Glascock tract. 11 The photo shows him having multiple employees, and in 1912 he donated $40 to the building fund for the YWCA. 7 That may not sound like much now, but would be more than $1,000 in 2022 terms. His business was worth an estimated $3,500 at the time of his death. 10

Some of the little we know about him comes from his obituary 2 and his death notice. 6 He was a 32nd degree Mason and a member of the Acacia Lodge. His body was at Hudson and Butler Funeral Home and a funeral held at the First A.M.E. Church, then on 15th Street. He is buried in Evergreen Cemetery.

Unfortunately Turner's will was declared invalid, having only been observed by one witness who also did the writing. The will mentioned an adopted daughter Genevieve Howard, and an adopted son, Brown, but little else is known about them. 10