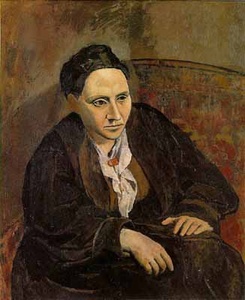 Born in Pittsburgh, Pennsylvania, notable writer and art collector Gertrude Stein (February 3, 1874 – July 27, 1946) lived in Oakland from 1880-1891. Their first year in The O, Stein and her family stayed in the Tubbs Hotel before moving to their farmhouse, which was located at what is now the intersection of 13th Avenue and East 25th Street. 1 Arriving at the age of 6, Stein moved to Baltimore (aka the East Coast’s Oakland 2) when she was 17, following the death of her parents. 3

Ohhh snap. And just when everything was cooling out, she had to go and make the biggest dis ever against Tha Town … or did she?

What was the use of my having come from Oakland it was not natural to have come from there yes write about if I like or anything if I like but not there, there is no there there.

Ouch. One shudders to think what she must’ve thought of Pittsburgh …! (And by the way, before anyone asks: yes, the above is just how she (usually) wrote – in a minimally punctuated, “cubist” style, not entirely un-reminiscent of the rambling, stream-of-consciousness circumlocutions of your typical Berkeley street person, and/or possibly James Joyce.)

Though made infamous, Stein’s notorious statement about visiting Oakland was not, in fact, her assessment of the city itself!

Rather, these words reflect her return to Oakland in 1935 while on a lecture tour in the United States. During the trip, Stein went to visit her childhood home and farm, only to find the house had been demolished, and the farmland converted to housing developments:

The house the big house and the big garden and the eucalyptus trees and the rose hedge naturally were no longer existing, what was the use, if I had been then my little dog would know me but if I had not been I then that place would not be the place that I could see. I did not like the feeling, who has to be themselves inside them, not any one and what is the use of having been if you are to go on being and if not why is it different and if it is different why not.

It is a funny thing about addresses where you live. When you live there you know it so well that it is like an identity a thing that is so much a thing that it could not ever be any other thing and then you live somewhere else and years later, the address that was so much an address that it was like your name and you said it as if it was not an address but something that was living and then years after you do not know what the address was and when you say it it is not a name anymore but something you cannot remember. That is what makes your identity not a thing that exists but something you do or do not remember. 4

When put that way, what else can anyone (especially if they’ve been around long enough to forget!) reply, but “I feel ya, uh … what’d you say your name was, again?”