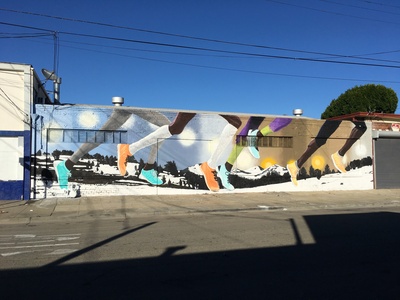 The Give Back Mural was created as part of a 2017 SPARC / Blight Busters project. It was designed & painted by Dave Young Kim. A community painting day was hosted and approximately 30 youth and neighbors took part. It received funding from the Oakland Awesome Foundation & SPARC. It is around the corner from the mural of the owner's dog. (KES Fitness Mural)

It features the Sierra Nevada range, a group of young girls running, and a timelapse of the sun.

The mural project came together at this location after coming across an article about the previous mural that had been destroyed at this same wall. 1