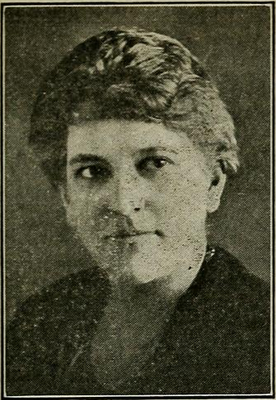 Gladys Barndollar
from Business Women's Herald, 1923Gladys H. Lent Barndollar (c.1872–August 5, 1938) was one of the founders of the Oakland Business and Professional Women's Club and served as its fourth president.

Gladys had previously headed the women's bureau of the Chamber of Commerce. The bureau started an "Oakland Label" program to encourage products made in Oakland to be promoted so that money would come back to Oakland, not unlike today's Oakland Grown program.

Barndollar was a pioneer in direct mail marketing. She was the first female president of the Oakland Advertising Club. She also served as the director of the Women's City Club. 1

Gladys was born about 1872 in Oswego County, New York to David Saulsbury O'Harra and Mary Elizabeth O'Harra. She married Benjamin F. Lent about 1892 and they had a daughter, Myrtle Hope Lent (Holtzmann) (April 24, 1892–December 9, 1959). It's unclear what happened to Benjamin. The 1900 census lists Gladys as divorced, but the 1910 census lists her as widowed.