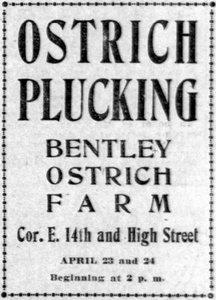 The Golden State Ostrich Farm opened as the Oakland branch of San Diego's Bentley Ostrich Farm at the eastermnost corner of East 14th and High Streets in 1908, in what the owners referenced as being part of Fruitvale, although the property is not currently considered part of this district. Note that the proponents originally noted that they intended to open the farm in Elmhurst when seeking investors for the project. After Oscar Bentley, the founder of the Bentley Ostrich Farm died in a 1912 automobile accident, his sons sold the Oakland location to local investors in September 1913, and the investors changed the name to Golden State Ostrich Farm..

Approximately 75 ostriches were farmed. Ostrich wranglers would place stockings over the bird’s heads to calm them while gathering their plumage - 24 long plumes from each wing, along with several smaller ones. Of those nearly 50 feathers, only a dozen would be of proper quality to decorate ladies’ hats.

Changing fashions and the outbreak of World War I in 1914 doomed the ostrich farming industry. In 1914 the The Game Breeder and Sportsman, Volumes 3-4 ran an advertisement for Golden State Ostrich Farm in which the company offered “For Sale, Twenty Pairs Full-Grown Mated Ostriches.” In early 1915, the farm declared bankruptcy, with newspaper articles noting that it one could now buy an entire ostrich for less than the amount once paid for the feathers to adorn a hat. 4

Part of ostrich behavior includes waltzing, the habit of spinning around and around crazily when the sun comes up. The birds would often fall and break a leg, a usually fatal injury in ostriches. According to Erika Mailman, Ostrich farmers in Africa factored in annual losses of 8–10% for ostrich waltzing deaths in 1892.

As late as 1968, Piedmont Avenue merchants sponsored an annual ostrich race between Pleasant Valley Road and Linda Avenue. The last race had six ostriches in competition. 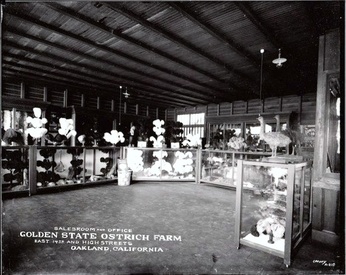 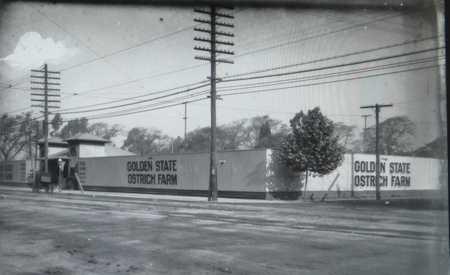